Camila Morrone is the stunning lady currently in a secret relationship with Hollywood star, Leonardo DiCaprio.

The two have been quietly dating for over a year and according to reports, the 22-year-old stunner recently had enough, of user’s mean comments on social media. Morrone fired back at people who had something to say about the couple’s age difference writing on Instagram “I just read some of my comments on my Instagram and . . . my god, people are so mean and full of anger with people that they know nothing about,”“I guess I just hope . . . people learn to live with a little less hatred and place their time and interests elsewhere, because living without hatred feels pretty good.”

Check out the Morrone’s top facts 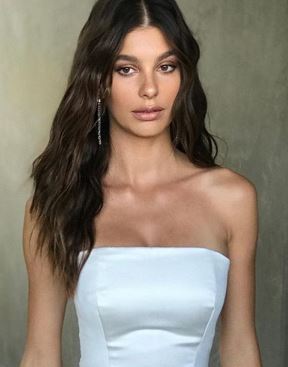 #1 She was born in Argentina

#2 Camila is a model and actress

Thoug Camila is only in her early 20’s, she began modeling in her teens. The Argentine-born model and actress, appeared in the 2018 Eli Roth adaptation of “Death Wish” -that same year she co-starred in Augustine Frizzell’s directorial debut Never Goin’ Back. She had previously appeared in James Franco’s film Bukowski.
As a model she is connected with the IMG company. She is also connected with the LA Model Management, Los Angeles. Camila who made her runway debut modeling for Moschino’s 2017 resort collection, snagged the cover of Vogue Turkey three years ago. In April 2018, she was featured on the cover page of Vogue Mexico.

Camila’s parents divorced in 2006 and her momther, Lucila Polak began dating iconic actor, Al Pacino. The former couple dated for years reason why Camila refers to Al Pacino as her stepdad, though the couple was never married.

#4 She and Leo keep a low-key- relationship

Camila has been romantically linked to 44-year-old DiCaprio since December 2017. They have since been spotted on various city walks together – even matching their outfits on a recent New York City excursion.
In May 2019, the lovebirds attended the Cannes Film Festival premiere of “Once Upon a Time in Hollywood,” despite not arriving together, according to USA Today.

Pacino and DiCaprio have been close friends for about 10 years, which means that Morrone has probably already been close to DiCaprio as a family friend for the past decade.

#6 She worked with Bruce Willis

In the film, Death Wish, Camila plays the role as Jordan Kersey, Paul and Joanna’s daughter. Though her role may not be a big one, she gets to work with the famed Bruce Willis.

#7 She is quite popular on social media

Morrone has been becoming a more popular name in social media due to her connection with two big names in the industry, Al Pacino and Leonardo DiCaprio. The stunner has over one million followers on Instagram.