Meet Guy Fieri’s wife, she has been in his life for a long time actually. She is lovely Lori Fieri, the couple tied the knot over 25-years ago and together, share two children.

The blonde has been with the restaurateur and celebrity chef through it all: winning Food Network Star, filming 1,100-plus locations on Diners, Drive-Ins, and Dives; you name it. It’s safe to say, without Lori, there wouldn’t be a Guy Fieri as we know him today.
Check out below, more interesting details about Lori, her husband and the life they have built together.

Guy Fieri wife is the lovely Lori Fieri. Their marriage has survived over two decades in Hollywood. The two have been husband and wife since 1995.

Speaking about their marriage, Guy has been quoted saying

“My wife and I have gone from being married at a young age to being where we are now — to get here, you have to be willing to adapt and understand,” “It’s all compromise and understanding.”

It hasn’t been always that easy. A few years ago, Lori’s hubby aka “Guido” Star of Diners Drive-Ins and Dives and Guy’s Big Bite got into a fight! Yep, a real life close fist fight! At the time, he made headlines after the Food Network star got into a boozy brawl that was caught on tape! It’s safe to say, Lori has been by his side every step of the way. Back in 2006 when her restaurateur hubby first rose to fame, she was the first to encourage him to go all out. She would never forget when in 2005 the Fieri’s received a phone it will change it all. Lori recalls looking him in the eye.

“I said, ‘Listen, this is the opportunity of a lifetime. If you don’t try, you’ll never know. You need to go.’”

It is widely known how much Guy credits his wife with being game to tackle every project or crazy idea he’s had over the years.

She grew up in North Providence, R.I., with a dad who’s a toolmaker and a mom who cleans houses. She was making the move from Rhode Island to San Diego when she met her future husband.

Lori who celebrates her birthday on May 31st, will turn 51, this year. She is only a couple of years younger than her long time hubby.

Unfortunately, Lori Fieri is not a big fan of social media. Though she is widely recognize wherever she goes, Guy Fieri wife doesn’t have an IG of her own; instead she is often featured on her husband’s account.

Don’t tell me that every time you hear about the better half of a celebrity chef, you don’t ask yourself who does the cooking at home.

As much as we’d like to think that celebrity chefs showcase their talents at home as much as they do for the cameras, truth is at home, they can rely on their spouses. That’s the case at least for Fieri, who is said to enjoy his wife’s cooking.
The restauranteur has been vocal about his wife’s cooking and said during an interview there’s one dish he especially loves for her to make for him. Fieri told TODAY Food in an interview “There’s an old school recipe she makes that she brought home from where she grew up in Rhode Island,” “It’s one of the first things she ever cooked for me and it’s still a favorite of mine.”

Fieri called his wife’s creation a “far greater” version of noodles and beef.

“She sautés top sirloin with onions, mushrooms and garlic,” “And she makes this fantastic gravy and serves it over egg noodles. It’s a very simple dish but it’s one of my favorites.”

So there you have it, the answer is yes, Lori Fieri can definitely cook.

That said, Fieri often takes the reins to prepare dinner for Lori.

“My linguini and clams is probably one of her [Lori’s] all-time favorites,” “Especially when the clams are really small. And when we sit down together to have a really nice dinner.”

According to Delish, when these two met it was love at first sight. At the time, Guy was running a restaurant in Long Beach, CA, and swooped in to do damage control when he loyal friend Lori wasn’t having any of it.

“Her friend had been let go from the restaurant, and they weren’t supposed to be there,” Fieri explained. “I was talking to her friend and saying ‘Hey, listen, wait a few weeks before you come in,’ and standing behind her is this blue-eyed, blonde girl giving me this mean mug.”

‘You can’t make us leave,’ and I was like, ‘You don’t have to.’,” he said. Guy asked them to keep a low profile. They agreed, and the three got to talking. Guy said about that first meeting

And the first time he cooked for her, Lori’s reaction was epic, she said

‘You made all this?’ We both love food, so being able to cook, that was one of the things that impressed her.”

The rest is history. Since then, Lori has been her hubby’s number one fan. 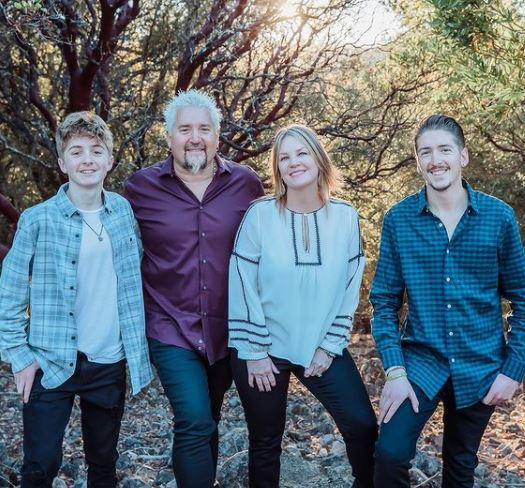 She’s been a devoted mother to the couple’s two sons. for Mother’s Day, son Hunter posted a photo with the caption

Happy Mother’s Day to the Queen! Ma you are simply amazing! Thank you for all that you do for this family! I love you”

But what strikes the most about her is that although she has savored the VIP treatment, she keeps her feet well grounded,

“Are we living rich and famous? Absolutely not,”

Instead she reveals the couple has staggered money for their kids education.

Hunter Fieri is active on Instagram and writes on his bio, Prince of FlavorTown. He is an alum of University of Nevada, Las Vegas.

Ryder Fieri is also on IG, but keep his account private. He turned 15 in 2020. Hunter wrote a post to wish him a happy birthday saying

What is Guy Fieri’s net worth

Guy was born on January 22, 1968 in Ohio. He grew up in California, where his parents ran a clothing store.
His passion for food began in high school after he went to France for a study abroad program.
Following his graduation from the University of Nevada, Fieri got his first real restaurant job at Parker’s Lighthouse. From there he jumped to become the manager of six Louise’s Trattoria restaurant locations.

He slowly but surely began working his way up the celebrity chef ladder. He appeared on season two of the “Food Network Star” in 2006 and was crowned the winner.

He became known for driving his red Camaro across America for his show Diners, Drive Ins, and Dives, which takes viewers on a tour of America’s less-celebrated restaurants. 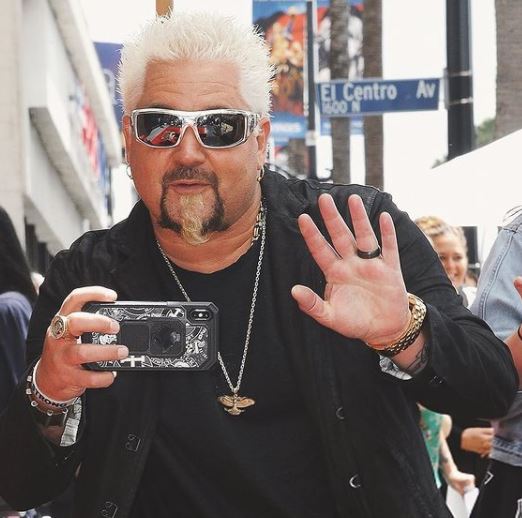 Today, Guy Fieri is one of Food Network’s stand-out stars. He has multiple shows on the network and is perhaps best known for his signature hairstyle and catchphrases. The chef owns restaurants across the globe.
Another highlight came in 2019, when he became the third chef to have a star on the Hollywood Walk of Fame, joining the likes of Bobby Flay and Wolfgang Puck.

He has released three cookbooks and has his very own Northern California winery named after his sons, Hunt and Ryde Winery.
2020 didn’t see him slowing down, Fieri codirected and starred in a documentary that chronicled the restaurant industry during the pandemic. In addition, he created the Restaurant Employee Relief Fund, which has provided grants to restaurant workers.

According to online sources, the heavily tattooed chef is worth around $25 Million.

How much does Guy Fieri make a year?

Fieri has opened more than 60 restaurants around the world. And while some have closed, at least 17 of them are still open, according to the restaurateur’s website.

Fox Business says that, as of 2018, Guy Fieri rakes in $8 million annually.

Why did Guy Fieri change his name?

Is actually thanks to Lori Fieri, that Guy ended up adopting his birth name, Fieri.

When he was born, his last name was spelled Ferry. The reason? His grandfather, who came to the country from Italy, changed the original spelling in order to make the name sound more American.
When Guy and Lori tied the knot, he decided to change his last name back to its original spelling. According to Guy himself, it was Lori who inspired him to change it back.