John Allen Newman is the man who has Omarosa Manigault head over heals in-love. The pair reportedly got engaged last July and were married in April 2017.

We all remember Omarosa becoming the villain in Trump’s reality show The Apprentice, nowadays the president’s director of communications for the Office of Public Liason, has not changed that much. Recent reports indicate Omarosa bullied a reporter and even threw the words ‘dossier’ at the latter.

So, having all that in mind, who could possibly be the man brave enough to take on Omarosa’s feisty character? Meet, John Allen Newman below. 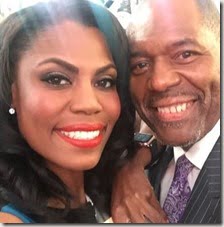 Omarosa’s love life has been somewhat tumultuous. In 2000, Omarosa married Aaron Stallworth and changed her last name to Manigault-Stallworth. They separated in 2005 and later divorced.

In 2010 she was previously engaged to famous actor Michael Clarke Duncan, one of America’s most beloved actor. The lived together when Duncan suffered a heart attack in July 2012 and died two months later. Dr. John Allen Newman is a senior pastor who runs The Sanctuary @ Mt. Calvary in Jacksonville, Florida. According to its website, Pastor John Allen Newman has been called upon to provide leadership to business organizations on a local and national scale. It goes on to say he prides himself on being a top-notch communicator.

As a political activist, while still a college student, he advocated for migrant workers’ protection. From 1984 – 1988, he worked with the Jesse Jackson presidential campaign as chairman for the Northeast Florida area. He was the initiator and organizer of the campaign for Nat Glover, the first African American sheriff in the State of Florida.

He was additionally active in the Obama 2008 presidential campaign. Pastor Newman is frequently in contact with the White House staff and has attended briefings with Presidential Senior Staffers as well as with President Obama. He has also provided leadership in the election of the first African American Mayor of the City of Jacksonville.

Rev. John Allen Newman has also held a number of memberships with a number of organizations, he is chairman of the Jacksonville Port Authority board.

John Allen Newman was previously married to Andrea Newman, who can be found as First Lady Newman –serving in the women’s ministry.