Desiree Jacqueline Guerzon is the wife of 14-years of Under Armour CEO, Kevin Plank. The pair tied the knot in 2003 and have two kids together. You’ve probably heard about her hubby’s famous sport brand but did you know his wife is a Filipina?

Desiree’s husband, Kevin A. Plank was born on August 13, 1972 in Kensington, Maryland, USA. He is a businessman, the founder and current CEO of the highly successful sports apparel company he took public in 2005.

Accoridng to the Under Armour website, Plank started selling shirts out of the trunk of his car, and eventually the world took notice. Over two decades later, Under Armour is a multi-billion dollar global brand and the maker of the most innovative performance footwear, apparel, and accessories in the world. 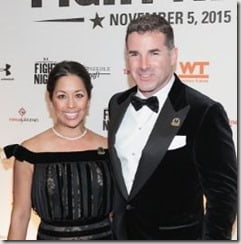 Desiree Jacqueline Guerzon who goes by “D.J.” Guerzon is certainly a proud and supportive wife. She is also the mother of the couple’s two children: 13-year-old boy Kevin James who is very much into sports including hockey, and a 10-year-old daughter Katherine.

Desiree is a Filipino-American who was brought up in the U.S. The pair dated for ten-years before getting married in 2003. Desiree Jacqueline Guerzon and Kevin Plank attended the same high school (St. John’s) in fact, they went to prom in the same car but with different dates.

The two found each other again in college. Kevin ran into D.J. on his first day of college, and they started dating a few months later, and the rest is history. They both attended the University of Maryland. She also studied nursing at Georgetown University.

Having known each other for so long, is safe to say Desiree Jacqueline Guerzon became a her hubby’s biggest fan and supporter. During an interview she recalled the time she helped Kevin sell t-shirts at a Grateful Dead concert. Her mom even pitched in by tie-dyed the shirts in the backyard of her family’s home.

In September 2015, her hubby announced Under Armour’s expansion plans in the Philippines and Asia –which we assume Desiree might have something to do with it.