Deanna Descher is the loving wife of lawyer and businessman Andrew Puzder. Her husband was tapped by President Trump to run the Department of Labor. So we tough you might want to know more about him and his wife.

Deanna’s husband was born Andrew Franklin Puzder on July 11, 1950. The Ohio native was born to Winifred and Andrew Puzder. He was a student at Kent State University in Ohio during the 1970 shooting –as a result he dropped out.

He later graduated from Cleveland State University with a B.A. in history. He then went on to get a JD in 1978 from Washington University School of Law in St. Louis, where he was editor of the Law Quarterly.

The former associate in St. Louis for attorney Morris Shenker, moved on to work with trial lawyer Charles Seigel at the Stolar Partnership. Puzder is known for expressing his pro-life views early in his career. He wrote for the Stetson Law Journal in 1984 and also wrote a Missouri abortion law that was upheld by the U.S. Supreme Court in 1989; becoming a founding member of the Common Ground Network for Life and Choice.

While being the chair of the Task Force for Mothers and Unborn Children, he met Carl Karcher, ‪the founder of the Carl’s Jr. and CKE Restaurants, Inc. (CKE). . Puzder was hired by Carl to solve his serious financial problems. In 1995 he was named Executive Vice President and General Counsel for Fidelity. In 1997, Puzder became Executive Vice President and General Counsel for CKE as well.

Puzder eventually became president and CEO of Hardee’s and CKE –which now owns owns or franchises over 3,700 restaurants in America and foreign countries, generating $1.4 billion in annual revenue and employing over 75,000 people.

As for his personal life, Andrew has had the love and support of his wife, Deanna. 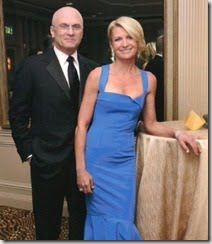 Deanna Descher who goes by “Dee” also has a background in law. She was admitted to The State Bar of California in 1998 and is currently inactive. She attended Washington Univ; St Louis MO and earned her law degree from Western State Univ COL; Fullerton CA.

Her husband was previously married to Lisa Henning. His first marriage lasted from 1973–1987 and produced two children.

Andrew and Deanna have been together since 1987, making her his second wife. He has a total of six children so that would mean he and Deanna Descher are the parents of four kids.

Deanna Descher and her husband raised money for the Trump campaign in 2016, and personally contributed over $330,000.

Aside from being a proud wife and mother, Deanna Descher is also a grandmother to six grandchildren.

Deanna Descher and her husband are residents of Franklin, Tennessee.

Check out more interesting facts about her on the link below.