Peggy McDonnell is the longtime wife of Cyrus Roberts Vance Jr. –who serves as the District Attorney of New York County.

Her husband, the son of Cyrus Vance, former Secretary of State under President Jimmy Carter –was named the District Attorney of New York County on January 1, 2010.

Mr. Vance was born and raised in Manhattan, and is a graduate of Yale University and Georgetown University Law Center.

As District Attorney, Mr. Vance’s many achievements include the takedown of numerous violent street gangs. In 2011 he was elected by his peers to serve as President of the District Attorneys Association of the State of New York for the 2012 term. Mr. Vance also serves as co-chair of the New York State Permanent Commission on Sentencing.

Prior to his career as DA, Cyrus co-founded McNaul Ebel Nawrot Helgren & Vance, PLLC, which became one of the pre-eminent litigation firms in the Northwest. While living in Seattle, he also taught trial advocacy as an adjunct professor at Seattle University School of Law.

He was also a partner at Morvillo, Abramowitz, Grand, Iason, Anello & Bohrer, P.C.

Vance and his wife, Peggy McDonnell reside in the Upper West Side. The two have been married for decades. Meet Peggy below. 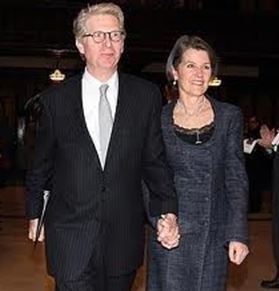 Peggy McDonnell was born to Mr. and Mrs. T. Murray McDonnell. Her father is a vice president of Allen & Company, the New York investment banking house. Peggy grew up in New Jersey, she has two sisters, Anna and Megan.

According to her NY Times engagement announcement, Peggy is a great-granddaughter of the late Thomas E. Murray, inventor of electrical and welding devices.

She attended Hamilton College and worked an administrative assistant at the Taylor Galleries in Dublin. When the couple began dating, Peggy worked in Ireland doing finances for the art gallery.

Peggy McDonnell met her then future husband as young kids whose families spent the holidays together. The two reconnected after Cyrus finished law school. The couple was married on May 5, 1984. The ceremony was performed by the Rev. Michael Alliegro.

Following their marriage, the two became parents to two children, now grown adults. Through the years Peggy McDonnell has sure been a big supporter of her husband’s career.  She’s always pictured smiling next to him during public events.

Find more interesting details on Peggy McDonnell in the link below