Tristan Thompson, the professional athlete and public figure is known for his career in the NBA, but how much do you know about his lifestyle, his girlfriends, his achievements and his net worth? Have you ever wondered how much Tristan Thompson net worth is?

Tristan Thompson has been carving his path in the NBA for years becoming a successful athlete and making both fans and major money along the way.
The professional basketball player has managed to stay in the interest of audiences to date.
Want to know more about him? Keep scrolling down and let’s see what more we can learn about the basketball megastar.

Tristan Thompson was drafted to the Cleveland Cavaliers in 2011, while he was studying at the University of Texas. Thompson made $2,999,459 during his rookie season.

The team won an NBA championship in 2016, and at the end of last year, he became the first player in franchise history to play 400 consecutive regular-season games. Before the start of the 2015-16 season, the Cavs signed Tristan Thompson to a five-year, $82 million contract. 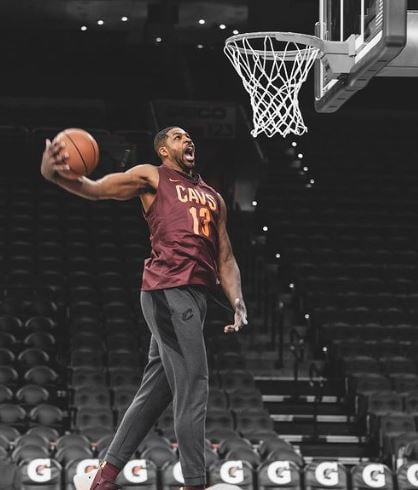 Tristan last played for the Cavaliers in 2020.

According to sources, Tristan Thompson has made really good for himself and his net worth is currently estimated at $45 million.
His wealth stems directly from his career as a basketball star, other sources include acting and sponsors deals. 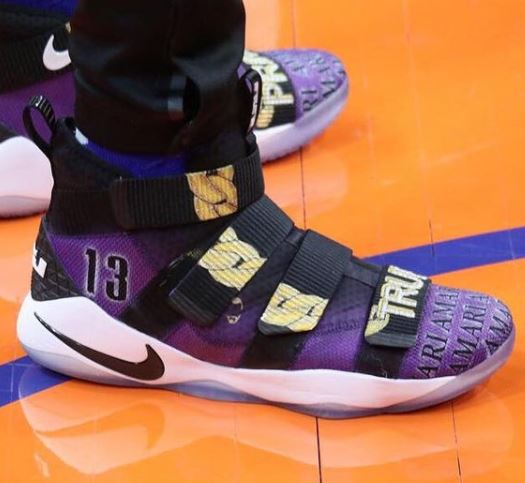 Thompson first signed a two-year, $7.38 million rookie contract with Cavs. He made $2,999,459 during his rookie season. He averaged 8.2 points and 6.5 rebounds, en route to making the All-Rookie team.

In his second season, Tristan Thompson put up 11.7 points and 9.4 boards while making $3,894,240. It was a no brainer for the Cavs to exercise their third-year option on Thompson. It was worth $4,062,000. Tristan averaged 11.7 points and 9.2 rebounds in his third season and was starting to establish himself as one of the best rebounders in the NBA.

Before the start of the 2015-16 season, the Cavs signed Tristan Thompson to a five-year, $82 million extension-contract.

After the move, the Cavaliers said on a statement about the star

“Tristan Thompson represented the Cavaliers and the city of Cleveland with the utmost grace and class during his nine seasons in Northeast Ohio. Tristan embodied everything a franchise would want in a player during his time as a Cavalier. He became a champion, a mentor and a great community partner through his selfless acts off the basketball court. Affectionately recognized for his durability, competitive spirit and determination, Tristan was an integral part of our four consecutive NBA Finals trips, culminating in the franchise’s first-ever NBA Championship in 2016. We thank Tristan and wish him nothing but the best, knowing that he has earned a place in the hearts of Cavaliers fans and this organization forever.”

Thompson is the owner of a huge mansion in Bratenahl, Quicken Loans Arena in downtown Cleveland which he bought in 2016 for about $3 million.

A few years ago Tristan launched an education program called “BLOCKS 13” in the public school system for students in grades 6-8. BLOCKS 13 focuses on Behavior, Leadership, Opportunity, Character, Knowledge and Success, a program developed by Thompson to help at-risk children stay on the right track in school.

“Being able to take kids on shopping sprees and the turkeys, that’s just from the love of my heart,” “It’s just putting a smile on someone’s face. 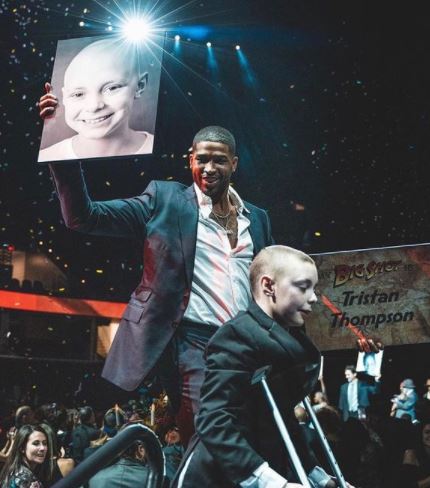 Tristan Thompson has been praised for his community service in the past. Due to his commitment in supporting the community he was even nominated for the 39th annual J. Walter Kennedy Citizenship Award presented by the Pro Basketball Writers of America. At the time, he said

“Me being blessed, you need to bless others,” “That’s what my mom taught me being young and growing up in the church. That’s what we’re here to do, is bless each other.”

Thompson’s community service involved purchased turkeys and full bags of groceries for 150 families from Historic Greater Friendship Baptist Church in Cleveland, shopping sprees for children, as well as working to raise awareness of domestic violence and pediatric epilepsy, which affects his younger brother. 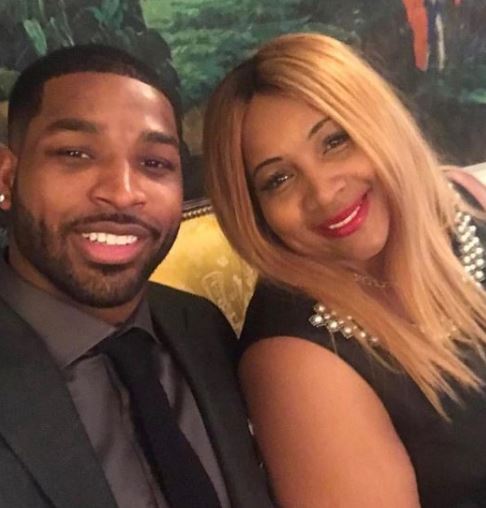 Tristan Thompson was born in Toronto, Ontario, Canada in March 1991. Thompson moved to the United States as a high school sophomore to attend St. Benedict’s Prep in Newark, N.J.
He then moved to Nevada and played for Findlay Prep late in his junior year and for his senior season.
After his senior year Thompson was a McDonald’s All-American and become the 4th and 5th to do so with teammate Cory Joseph. Tristan was also named a Jordan Brand Classic All-American.
Thompson played for The University of Texas where he won the Wayman Tisdale Award for USBWA National Freshman of the Year and was named to the All-Big 12 Second Team, Big 12 All-Defensive Team, and Big 12 All-Rookie Team.

Thompson was drafted #4 by the Cleveland Cavaliers in the 2011 NBA Draft. Tristan was named to the NBA All-Rookie Second Team in 2012. He has also competed internationally for Canada and was the first Canadian to win All-Rookie team honors.

He assisted the team in getting to the 2015 NBA finals. However, the Golden State Warriors won the NBA title that season. Nevertheless, the former Longhorn came off as one of the best rebounders and offenders. He also signed an $85 million contract that stretched for five years.
Then he helped the Cavaliers reached the NBA finals in 2016. Along with LeBron James, he led the team to their first-ever NBA Championship in its history. The following year he faced some injuries and could not attend all games in the regular season.
Nonetheless, he helped the team to reach the 2017 and 2018 NBA finals. But the Warriors beat them for both the titles again. After that, he missed a lot of games in the next season due to an injuries on his foot. 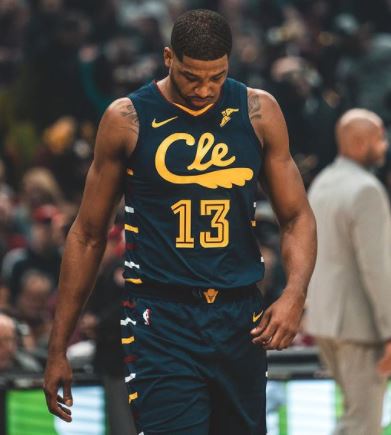 He played with the Cavaliers until 2020. He was the team’s longest-tenured player, after being selected fourth overall in 2011.
Thompson was always a consistent player with the Cavaliers and last season was one of their best players. It was never a surprise to see Thompson gobbling up rebounds on both ends of the court but, he was also a force offensively as well – averaging a career-best 12.0 points per game during the 2019 season.

In November of 2020, free agent center Tristan Thompson signed with the Boston Celtics on a two-year, $19 million contract. Thompson had a few interested suitors, including the Cleveland Cavaliers, the Toronto Raptors, the Los Angeles Lakers and the Los Angeles Clippers. But, according to league sources, the Celtics were always a darkhorse favorite for Thompson’s services.

Tristan has two different baby mamas, the first is model Jordan Craig, with whom he was right before getting into his relationship with Khloé in 2016.

Craig was pregnant with his son at the time, but that didn’t stop the NBA star from starting things with Khloé. Jordan Craig is the mother of Tristan’s first child, Prince Thompson born in 2017.
Tristan is rarely seen with Prince Thompson, but according to reports he pays $40,000 a month in child support to Jordan on Prince’s behalf. 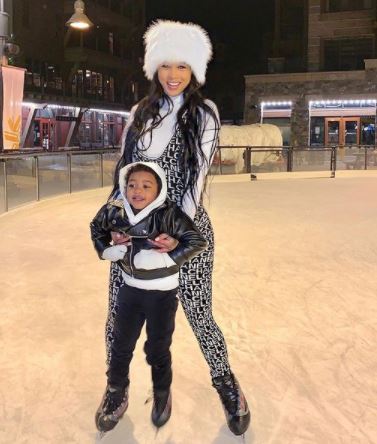 Tristan Thompson who was already famous in his own right as a basketball player, reached international stardom as the boyfriend of Khloe Kardashian.
The two began dating in 2016, however their relationship has been marred with allegations he has cheated on her.

The pair were first rumored to be seeing each other in September 2016, when they were both spotted leaving Bootsy Bellows nightclub in Los Angeles within minutes of each other.
Days later they were seen looking loved up on a romantic Mexico getaway.

Khloe’s best friend Malika Haqq confirmed how close they’d become, and said: “He’s really nice to her. He’s the coolest guy in the world — and you know, Khloé’s always loved basketball.
They officially confirmed their relationship shortly after Khloe’s divorce from husband Lamar Odom had finally been settled in 2016.

In December 2017, the couple announced that they were expecting a baby together. Khloe gave birth to their daughter, True Thompson on April 12, 2018. 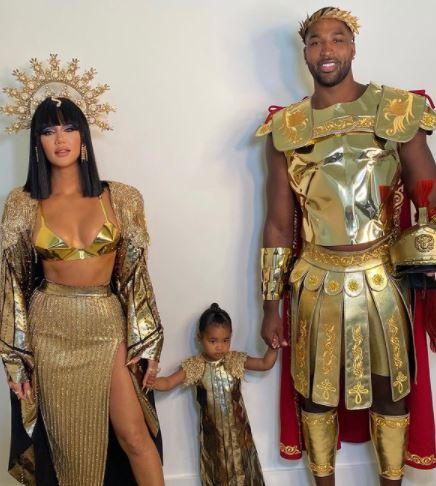 In February 2019 Khloe announced their sudden separation after allegedly catching Tristan cheating with a much younger girl named Jordyn Woods. Jordan also happens to be one of Kylie Jenner’s best friends and even lived at Kylie’s mansion at the time the affair was discovered.
Fast forward to 2021, reports have surfaced that Khloe has taken back Tristan and they are giving their relationship, another go. The two quarantined together during the COVID-19 pandemic.

Tristan who currently plays for the Boston Celtics, is the champion of the 2016 NBA Title with the Cavs. With his size and strength, Thompson became known for his explosive playstyle and his aggressive rebounding.
The center and power forward has enjoyed great success in his ten-years playing for major NBA teams.
During his time with Cleveland, Thompson’s legacy is cemented as one of the all-time greats in franchise history. As mentioned before, he owns numerous rebounding accolades and was instrumental in helping the Cavaliers win the 2016 NBA Championship.

Most professional athletes often have a collection of luxurious cars and toys and Tristan Thompson is no exception. 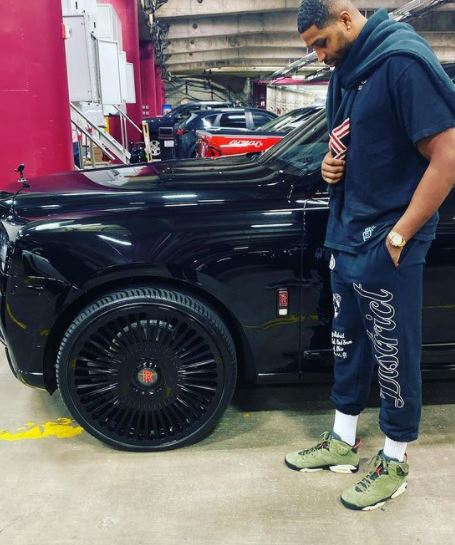 The 30-year-old Canadian-American has at least 8 luxury cars. His set of cars include Lamborghini, Lexus and Range Rover.

Among Tristan’s favorite TV shows, is probably KUWTK, since is where television personality and businesswoman Khloé Kardashian appears. He actually starred in several episodes of Keeping Up With The Kardashian along with Khloe.

Being myself has worked out pretty well for me I think.

I think it’s important at the end of the day you know obviously playing in the NBA is a great thing, but representing your country at the highest level is something totally different.

So with the skinnier guys, you definitely want to make sure you get a body on them; that’s how you take away big guy’s length, by getting into their bodies.

Obviously, everyone wants to play in the NBA but I think if you handle what’s in front of you first you’ll get your chance when your name is called.

Obviously I love playing the game of basketball. That’s what God blessed me to do.

Among the lessons we can learn from Tristan Thompson is the way he accepted to be mentored by LeBron James. 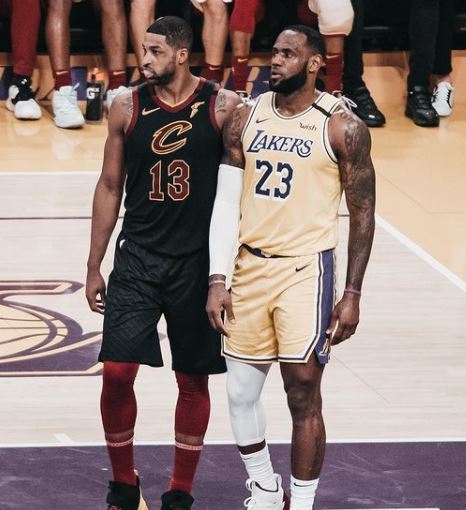 When LeBron James first returned to the Cavaliers after a stint with the Miami Heat, he tried to take Thompson, Kyrie Irving and Dion Waiters under his wing. Both Irving and Waiters resisted James’s heavy-handed tutelage but Thompson embraced it. James taught him how to treat his body right. How to maximize every practice and workout. He also taught Thompson how to lead both vocally and by example.

When James left a second time and Cleveland was beginning to tear down and rebuild, most would try to get out of town as quickly as possible. Thompson did the opposite of that by actively embracing his new situation. Not only that, but, according to sources, Thompson viewed it as one of his duties to help carry the cultural legacy James had built.

What does Tristan Thompson do now?

Tristan is widely recognized for having led the Cavaliers to an NBA Championship victory alongside his legendary teammate LeBron James; defeating the Golden State Warriors in seven games after the Cavaliers were down three games to one.
Nowadyas, Tristan Thompson remains active in the league and does what he does best currently as a player with the Boston Celtics.

Where does Tristan Thompson live now?

Tristan is currently based in Los Angeles, California.

Where can I find Tristan Thompson on social media

Thompson can be found on most common social platforms including:

Tristan Thompson is active on Instagram where has over 3 million followers. 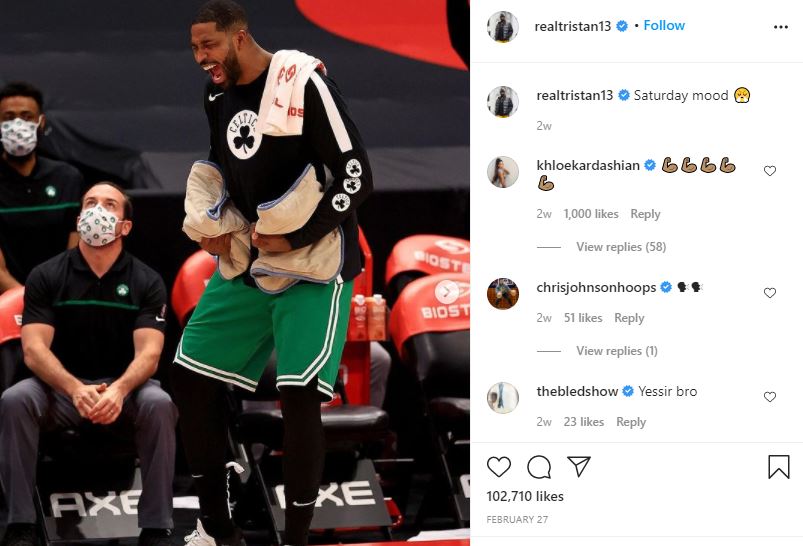 Tristan Thompson is also on Twitter with over 600k followers.

Tristan Thompson can also be found on Facebook, where he has over 500k followers.