Steven’s lovely wife is well known as a former TODAY co-host and also for being the host of her own TV show, the Tamron Hall Show.

Tamron Hall and Steven Greener have been very private about their relationship. Though she is a public figure, Greener seems more of a private person. Want to know more about him?
Sure you do! Here we’ll tell you everything we know about Greener and the couple’s family life.

Tamron Hall husband is Steven Greener. The two keep an ultra discrete relationship, to be fair, they haven’t been together for long and the exact nature of how they came to be is not all that clear, until now that is.

Steven’s wife in fact, was romantically linked to fellow journalist, Lawrence O’Donnell in the past. However, her relationship with Greener seems to be a strong one since the couple just welcomed their first child together in 2019.
Greener was pretty much a mystery for many. The two tied the knot in a secret ceremony in 2018. Tamron told the world about his existence the same day she announced she was 32-weeks-pregnant. 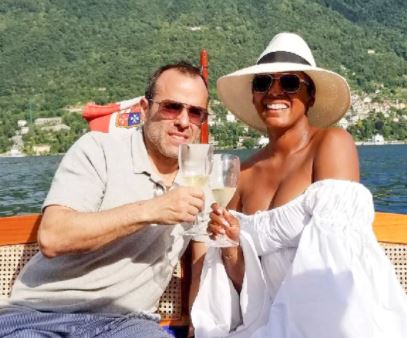 According to the Washington Post, the story between these two actually goes a while back. Apparently Tamron Hall and Steven Greener would often run into each other at parties, on planes and, once, poolside in Los Angeles. Each time, Greener would shoulder up to the veteran TV anchor and ask, “What are the odds?”

Long story short, Tamron Hall had found her soulmate, at 47. She said about keeping the details of her relationship out of the public eye

“As an interracial, interfaith couple, we knew the world would throw darts”

Who is Tamron Hall’s husband?

Steven Greener is a successful music producer. He is the head of Music Talent at Primary Wave Entertainment.

According to his LinkedIn, he is a music, film and TV executive based in Brooklyn, New York –with over 20-years-experience on the field. He began his career overseeing Medina/Pollack Entertainment and was later recruited to Elephant Walk Entertainment. 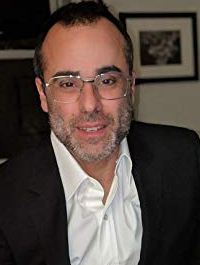 According to his IMDb, he’s been the producer on a number of projects including Soul Men, Starting Under, Welcome to the Family, Roseanne’s Nuts, Woman Thou Art Loosed: On the 7th Day, Comedy Central Roast of Roseanne, Downwardly Mobile and Love Thy Sister.
He’s worked with a number of personalities including Fantasia Barrino, Cee Lo Green, Eric Benet and others.
Is safe to say Greener leads a much more low profile than his TV host wife.

Other interesting facts about Tamron Hall husband Steven Greener is that he is a huge fan of the Yankees and is also Jewish.

Speaking to People, Steven Greener said about his famous wife

“Tamron is one of the most authentic, loving, honest, caring people I’ve ever known,”

“My favorite part of marriage and fatherhood so far is realizing every day I am exactly where I was always meant to be — with my family. I am home.”

What is Steven Greener worth?

The estimated net worth of Steve is around the $2 Million mark. He makes his money from his work as a music and film producer.

What is Tamron Hall’s net worth?

She was born Tamron Hall on September 16, 1970. The Luling, Texas native holds a Bachelor of the Arts degree in Broadcast Journalism from Temple University.

According to her bio, on MSNBC, Hall began her broadcasting career at KBTX in Bryan, Texas, as a general assignment reporter.

Prior to joining MSNBC in 2007, Tamron spent 10 years at WFLD in Chicago, where she held a number of positions including being the host of the three-hour “Fox News in the Morning” program. Before joining WFLD, Tamron spent four years as a general assignment reporter at KTVT in Dallas. 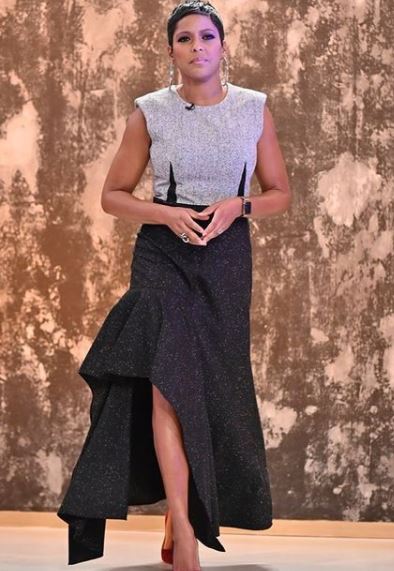 Since arriving to MSNBC, she has hosted several special reports for NBC News, including Making the Grade; several Dateline and Rock Center pieces, the 2012 London Olympics and Education Nation: Teacher Town Hall –which was nominated for an Emmy Award in 2011.
Fast forward to 2018, she landed a deal with Disney to executive produce and host a syndicated daytime talk show.

According to online sources, her net worth is estimated at $5 Million.

Tamron Hall is the granddaughter of a sharecropper who never learned to read. She was the daughter of a single mom, Mary Newton and was raised by her mother and stepfather. Speaking about her real father she once said

My biological father was not around, so the first dad I had was my grandfather.

When she referred to her stepfather, she said

My dad was a fantastic father. I call him my dad: He is my stepfather, but I’ve always said that I was born to a different father, but God brought in the man who should be my dad — and that is Clarence Newton Sr.

My dad spent his entire adult life in the military and he really brought discipline into my life.

Her stepfather has since passed away, however she said during an interview about father’s day that his sense of order and discipline impacted her life in a positive way. 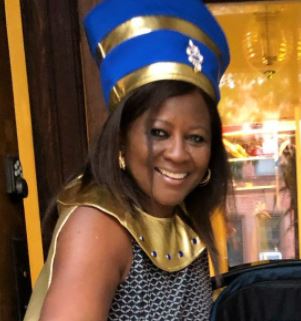 Tamron and her mom, Mary Newton are very close. In 2020, she posted a photo of her mother wishing her a happy birthday. Users were shocked to see how good her mom looks at 70. She wrote

Happy 70th Birthday today to my phenomenal mama. She’s never just a witness to life’s joy she is always a participant. She’s our Queen everyday and even on Halloween when Moses needed an ****** to help him hold his 10 commandments. lol.

Tamron’s older sister, Renate, was murdered in 2004, a victim of domestic violence.

In 2004, Renate, was found murdered in her Houston home, and the case still remains unsolved.
Since then, Hall has made it her mission to work with domestic violence groups alongside her nephews Damon and Leroy Moore.
Renate’s body was found beaten and bludgeoned to death, floating face down in the backyard pool of her Houston home.

She spoke candidly about her loss during an emotional interview with her nephew Leroy Moore III.

As she spoke to her nephew, Tamron teared up when she referred to her sister as the “life of the party” and her “effortless energy of love.” While her nephew added what he felt like was taken from him after his mom’s death

“Everything. She was my mom. Most of all it was just somebody to communicate with especially as a young man”

In 2017, Hall left NBC after she lost her dream job as the first Black woman to co-host an hour of “Today” in its then 62-year history.

But don’t feel sad about Tamron, since then, she has married, had a baby and debuted a hit show in a notoriously tough time slot. 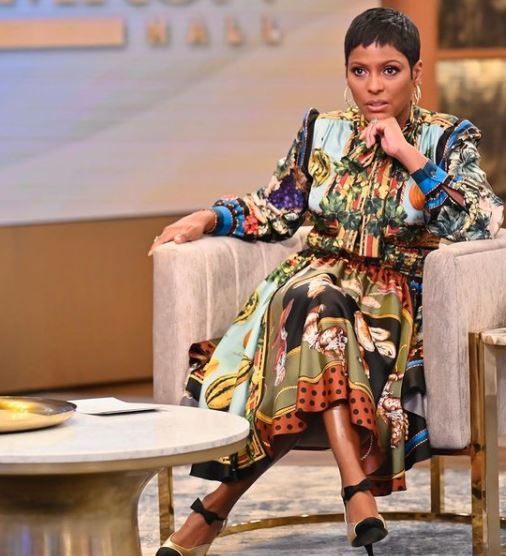 Since its debut in September 2019, the veteran journalist’s nationally syndicated daytime talker, “The Tamron Hall Show,” has gobbled up ratings and big-name gets.
According to reports, a month after its Season 2 premiere, Disney announced in October that Hall would be renewed, marking the first time a new daytime talk series secured a third-year run since “The Steve Harvey” show did it six years ago.

“I don’t want this platform to be seen as the ‘Ha-ha, look, they got it wrong.’ That’s not what I want”

Tamron Hall gave birth to a son, Moses –with husband, Steven Greener. The two welcomed their first born in 2019. Tamron was 48 at the time. Tamron Hall husband Steven Greener became a first time dad with the birth of their son. 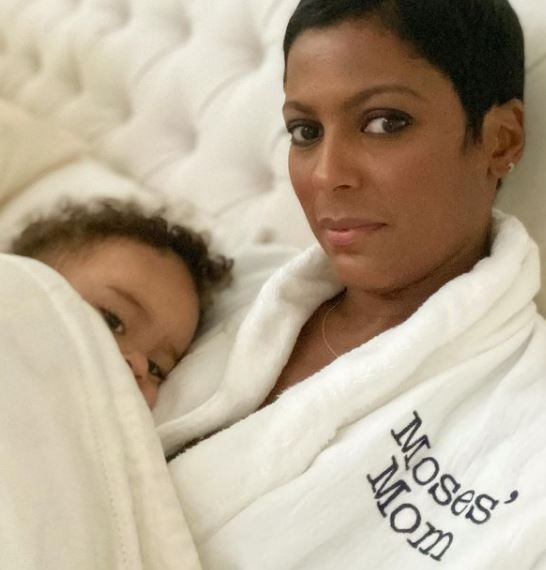 She shared the news of her pregnancy on IG around March with a funny post in which she danced to the viral kids’ song “Baby Shark,” holding a “Baby Shark” book in front of her, which she whisked away to reveal her baby bump before declaring that she was going to be a mommy shark soon.
“My husband Steven and I are beyond excited!” she wrote in another post, in which she said she is 32 weeks along.