Sasha Obama who was born June 10, 2001 –was seven when her father, Barack, became president of the US.  Fast-forward to today: Obama is out of office and Sasha is kissing boys at music concerts.

Matt Metzler and Sasha were caught having fun while attending the Lollapalooza festival over the weekend. The teen couple seem very comfortable around each other in the middle of the crowd and then it happen, a photo of the two making out surfaced.

The firs image was captioned: “Matt gonna get Sasha Obama.” Later, the user shared another snap of the two kissing. 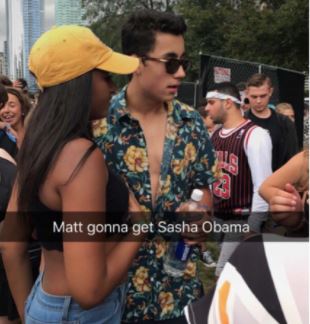 We need to remember, Sasha Obama is just a regular teenager doing what other teens do. However she will also forever be the daughter of a former U.S president, meaning someone is always watching. But let’s give her a break, she is young and she will learn …in time.

This is not the first time Obama’s pretty teenage daughter gets caught having fun with friends. Back in January she was pictured during an outing with friends while at a beach in Miami.

The former POTUS daughter also celebrated her sweet sixteen in a glamorous party thrown by her parents, earlier this year. According to the gossip site YBF, Sasha celebrated her coming of age with a birthday party in May.

But this weekend wasn’t only a busy one for Sasha and Matt Metzler. Her older sister Malia who was also attending the famous music fest, was caught dancing and rolling around to The Killers at Lollapalooza.

Sasha attends the prestigious Sidwell Friends School in Washington D.C. The school has been described as “the Harvard of Washington’s private schools.” Theodore Roosevelt’s son, Richard Nixon’s daughter, Bill Clinton’s daughter, and Al Gore’s son all attended the school in the past.

Do you think her boyfriend, Matt Metzler is a fellow high school student?