Malena Ernman & Svante Thunberg are the parents of teenage climate-change activist, Greta Thunberg -who has become the face of the global climate strikes.

Malena Ernman & Svante Thunberg young but wise beyond her years teen daughter first caught media attention when in August of 2018 she started a school strike for the climate outside the Swedish Parliament.
Since then it has spread all over the world and now involves over 100,000 schoolchildren. The movement is now called Fridays For Future. The couple welcomed daughter Greta who has been diagnosed with Asperger’s on January 3, 2003. In addition to Greta, they are also parents to younger daughter, Beata Thunberg. 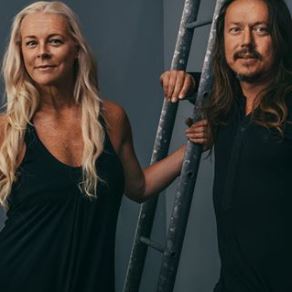 Since she no longer flies because of the aviation industry’s high carbon emissions, she was offered the opportunity to travel to the US on a zero-emissions sailboat. She’s been in Washington, DC, speaking before Congress and meeting with US lawmakers, including House Speaker Nancy Pelosi (D-CA), before she headed to New York City for the strikes and the summit.
If you think Greta is pretty impressive, her parents are right there with her.

Malena Ernman is one of Sweden’s most celebrated opera singers. Ernman represented Sweden in 2009 at the international song competition Eurovision in Moscow, Russia with her single La Voix.
Born Sara Magdalena Ernman on November 4, 1970, in Uppsala, Sweden; she studied at a number of prestigious educational institutions, including the Royal Academy of Music in Stockholm and the school of the Royal Swedish Opera. Best known for her years of opera and concert performances all over Europe, Ernman made her classical crossover album debut in 2009 with La Voix du Nord. A double-disc album that features pop crossover songs on its first disc and arias on its second disc, La Voix du Nord was a chart-topping smash hit in Sweden and a Top 20 hit in neighboring Norway.
Like her daughter, Ernman is also a climate activist and regularly posts about threats to the environment on social media.

Her father is Svante Thunberg, an actor and author named after Svante Arrhenius, the Nobel prize-winning scientist who first calculated how carbon dioxide emissions could lead to the greenhouse effect.
He was born on June 10, 1969; the son of actor parents, he joined the Royal Dramatic Theater, Dramaten, in the early 90’s and began training as an actor at Göteborg University.
In addition, Svante Thunberg also serves as manager and producer for his wife.