Angel Conrad is the stunning twin sister, of troubled singer/actor Aaron Carter -known for his career as a pop singer.

Angel and Nick are also widely known for being the younger siblings of another major pop artist, Nick Carter -in addition they also have two other sisters, Bobbie Jean and Leslie Carter -who died of a drug overdose in 2012.

The five siblings were born to parents Bob Carter and Jane Elizabeth Spaulding. They also have two half-siblings Ginger Carter-Daniels and Kaden Carter on their father side.
Nick Carter, became a teen idol in the 90’s. All through the late 90’s and early 2000’s and even in present times Nick found fame as a member of the Backstreet Boys.
While Nick dominated the charts with the band, Aaron Carter also emerged as a hip-hop artist in the the late 90’s. Sadly the 31-year-old has been struggling and has allegedly been diagnosed with schizophrenia and bipolar disorder.

As a result, siblings Nick and Angel have filed for restraining orders against Aaron. Though Angel isn’t in the music business, she has made a career in the fashion world as a model.
Born one minute ahead of her twin brother on December 7, 1987 as Angel Charisma Carter; the Tampa, Florida native aspired to pursue modeling from a young age. According to ArticleBio, she officially started her modeling career back in 2000, at just 13 years old. There isn’t a ton of information about who she’s modeled for, but she obvicouly looks the part. She’s been modeling part-time since. 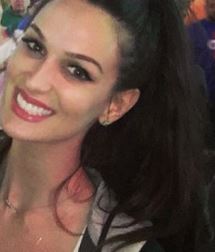 Angel is already a happily married woman. Angel is married to Corey Conrad, the walk the isle back in 2014 and they have a daughter named Harper Noelle Conrad. Hubby Corey is the Vice President, Strategic Alliances & Entertainment at Caruso.
She’s also appeared on TV; back in the fall of 2006, she appeared on all eight episodes of the reality TV series House of Carters. She was one of five Carter family members that appeared on the show so as to re-connect the family.

Judging by her Instagram feed, it seems as though she thoroughly enjoys spending time with her adorable family. Aw.
Find Angel Conrad on Instagram here.