Elias Farah has been named as the man who had an affair with former Assemblywoman Angela Wozniak and later accused her of harassment.

According to reports, Farah accused Wozniak of coercing him into the affair and workplace retaliation against him after he ended it back in 2016. Angela was admonished in 2016 by the Assembly for having a brief relationship with Farah, who had been a member of her staff. She recently acknowledged to the Assembly’s ethics committee that she violated the state’s public officers.
Wozniak was elected in 2014 after Dennis Gabryszak, a Democrat, resigned amid allegations of sexual harassment. Wozniak, a mom who was then 27 years old, cast herself as an agent of change.

Farah alleged he was coerced into a sexual relationship with Wozniak while they were working in Albany. When others learned of the relationship, Farah stopped going to the office. Wozniak however will face no fines after reaching a settlement. 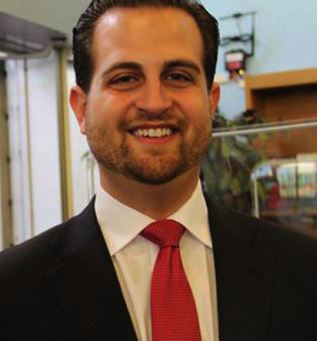 Elias Farah -a NY native, is the oldest of three children born to Christa Stritzel-Farah. His younger sibligns are Christian and Gabby.

According to his LinkedIn, Elias Farah who is an attorney based in Buffalo, New York attended St. Joseph’s Collegiate Institute. He graduated from the University at Buffalo with a BA in 2008. Later he attended Canisius College and earned an MBA in 2011. After gaining his MBA, he becamed a licensed stockbroker with series 7 and series 66 licenses.
He worked at Merrill Lynch until leaving to continue his education. He pursued a Law Degree at the University at Buffalo and graduated in 2016.
After Merrill Lynch Farah served as an intern at the New York State Supreme Court, he was then a law clerk for Serotte Law Firm, LLC -for five months. From January 2015 to January 2017 -he served as Legislative Director for the New York State Assembly.
Other positions include Assistant District Attorney for the St. Lawrence County District Attorney’s Office and public defender at Allegany County. He is currently listed as an attorney at Law Offices of Kenneth Hiller. Elias Farah has additionally served on a number of local school and non-for profit boards.