Tilda Cobham Hervey is the gorgeous Aussie actress dating Lion star, Dev Patel! The two were caught sharing a romantic and passionate kiss while out on a date.

Tilda and her man spent a romantic day in Los Angeles, the two hired a pedalo before strolling round Echo Park last week and wrapped things up at an East Hollywood gastropub.

According to reports, the pair met filming their upcoming movie Hotel Mumbai, based on the 2008 Taj Mahal terror attacks.

Tilda’s beau was previously in a six-year relationship with his Slumdog Millionaire co-star Frieda Pinto. They split back in 2014 and Tilda is believed to be the first girl he’s dated since. Let’s meet her below! 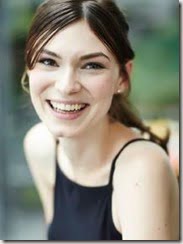 She was born the daughter of a lighting designer father and dancer mother. She was in youth circus programs from age nine, and designed her own performance pieces at high school in Adelaide instead of appearing in the school play.

The young actress made quite the splash on this side of the Atlantic after her remarkable performance in the low-budget independent Australian film 52 Tuesdays. She was 16 at the time and it became her movie debut.

In the film, Cobham Harvey plays Billie, a high school student whose life changes when her mother (Del Herbert-Jane) decides to gender transition.

To make her acting debut even more interesting, she admitted during an interview she landing the role of Billie was totally unplanned and random saying she only went to the 52 Tuesdays audition because she wanted to meet the casting director and join school friends who were already attending.

Since her breakout performance she has gone to accept other scripts including the 2012 film One Eyed Girl, where she plays a member of a doomsday cult.

She next appeared in the film Girl Asleep, as well as the television mini-series, The Kettering Incident. Tilda recently made her theatre debut for the State Theatre Company of South Australia in the world premiere of the new Andrew Bovell play Things We Know To Be True.

The lovely 23-year-old seems not much of a social media fan. Any thoughs on the new couple?