Celisa Henning is the Illinois mother whose body was found dead inside her home; with Celisa her, two daughters were also found dead –in what appears to be a heartbreaking double murder suicide.

Celisa Henning was a 41-year-old Joliet, Illinois resident who is believed to have shot her young twin daughters Makalya and Addison before turning the gun on herself. The three bodies were found on Monday by Celisa’s husband and the girls’ father.

According to reports, Celisa’s husband tried to contact her during the day but the mother of two did not answer. Steve Henning who is a plumber, arrived to the home to find the bodies of his wife and daughters inside of a bathroom in the house. Celisa and Steven Henning were married for 10-years. 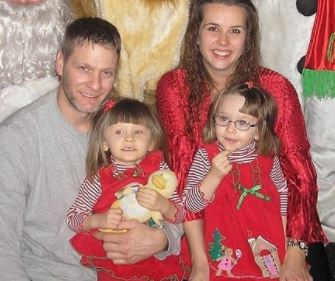 No reason for the tragic event has been revealed and it is not known if the mother of two left a suicide note. Celisa Henning has been described as a devoted mother and family and friends have been left in shock at the horrific crime.

A neighbor of the Henning family said the girls were very close to her mother and added that she never noticed any indicators that were a cause of concern.

As far as the investigation goes, it appears the pretty mom of two, could have been suffering from unspecified health issues as a result of a car accident. This information was given by the twins’ grandmother, Nora Henning according to the NY Daily News.

Celisa Henning had seen a number of doctors after suffering severe injuries in a 2015 car accident. She even filed a suit against a 61-year-old woman in connection to the car accident.