Karl Cook is the equestrian boyfriend of Big Bang Theory actress, Kaley Cuoco. His girlfriend got a little naughty on Wednesday when the blonde exposed her bare breast on snapchat!

Cuoco was goofing around with stylist Brad Goreski when he captured Kaley on his snapchat. He shared a funny image which Goreski covered with a giant heart emoji. The stylist sported the creepy grandpa filter while pointing at his pal’s ****.

The blonde announced her divorce from husband Ryan Sweeting last fall and was linked to Arrow actor Paul Blackthorne earlier this year. The couple tied the knot back in 2013.

Cuoco and the new man, are believed to have through their mutual love for horses. Kaley who also rides, and first boasted about Karl Cook on her Instagram, after he won a Grand Prix competition back in March.

26-year-old Cook is a professional equestrian rider and a rising star in show jumping in North America and Europe. Karl who has been riding since he was eight, comes from a wealthy family. 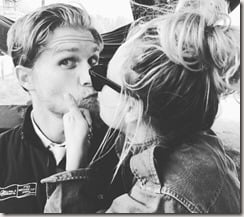 California-based Karl had a bad streak back in 2012. He told The Chronicle of the Horse, “He was riding badly, his horses weren’t at their best, and he just couldn’t seem to find clear rounds, no matter how high the jumps stood.”

He is the son of rider mom, Signe Ostby and billionaire Scott Cook. His mother is the owner of several of the horses on which he competes and a co-founder of Wisconsin School of Business’ Center for Brand and Product Management. His sister, Annie Laurie Cook, has also ridden on a competitive level. His father founded tax software firm Intuit in 1983. According to Forbes Karl’s dad is worth around $2 billion.

Will Karl Cook and his billionaire family be ok with Kaley’s exposing herself?

Cuoco is currently back at work on her hit CBS comedy, filming Season 10. And also having the time of her life with her new beau, if we may add.

Karl Cook is officially a man heading to the isle. The professional rider popped the question to The Big Bang Theory star on her 32nd birthday and shared the emotional moment on Instagram.

Extremely moved by the romantic moment, a Kaley Cuoco in tears is seen on the footage. She can be heard telling the camera “we’re engaged!” Karl responded, “You still haven’t said yes yet,” to which she responds a million times over, “Yes! I say yes! I say yes!”

The blond actress can be seen nearly speechless showing off her stunning diamond ring. Cook got up the courage to propose after nearly two years of dating.

She captioned the sweet video: “Still crying 💍 every part of this night has been perfection just like you @mrtankcook I love you forever!”

Congrats to the happy couple.