Susan Pompeo is the loving and supportive wife of politician and current Director of the Central Intelligence Agency, Mike Pompeo.

Susan’s husband previously served three terms in Congress representing Kansas and is also a former representative on the Republican National Committee and a member of the Italian American Congressional Delegation.

Born Michael Richard Pompeo on December 30, 1963; he attended the United States Military Academy at West Point, graduating first in his class. He earned a law degree from Harvard Law School and was an editor of the Harvard Law Review.

He founded Kansas based Thayer Aerospace along with three partners. In less than a decade, the company grew to having over 400 Kansas employees. In 2006, Mike sold his interest in Thayer Aerospace and soon thereafter became President of Sentry International, an independent business that is engaged in the manufacture, distribution and sale of equipment used in oilfield and industrial applications around the globe. Mike was elected to the 112th Congress on November 2, 2010.

He has been married to Susan Pompeo for a number of years. Meet her below. 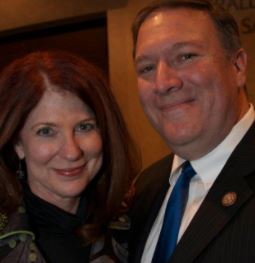 60-year-old Susan Pompeo hails from Wichita and attended Wichita State University. She is the mother of the couple’s only child, 26-year-old son, Nicholas “Nick” Pompeo. 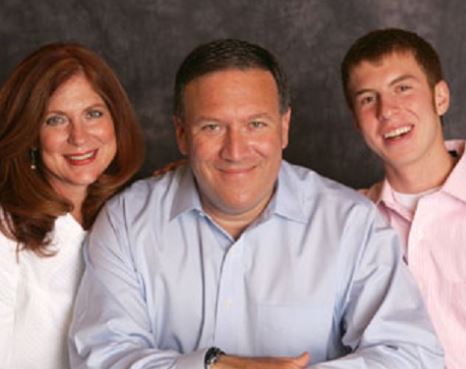 Susan is a former not-for-profit administrator and bank officer. She was honored with a Brick from The Management Team at Emprise Bank.

During an interview just before her husband was named the CIA director last year, Susan told media she considered herself an ‘equal partner in her marriage.’ The political spouse added that they sit facing each other when working from their home office.

When her husband ran for the House of Representatives in the 2010 election, she was an integral part of his campaign, even appearing in one of her husband’s ads.

Susan and her husband keep a low profile, however as the wife of a political figure Susan and her hubby are constantly in the eye of the media. Of the Washington frenzy, she adds ‘We do very little of the hoity-toity stuff in Washington but I have made friends with several of the spouses.’

Husband and wife have been active leaders in the community through teaching Sunday school at their church. Both Mike and Susan Pompeo have served on charitable boards of directors and have supported Wichita State in both athletics and academic pursuits.