Rakeyia Scott is the wife of NC shooting victim, Keith Scott. Rakeyia Scott who lost her husband at the hands of NC cops might hold one big part of the puzzle in what appears to be a senseless killing.

According to reports, Rakeyia Scott shot a video of the dramatic moments when her husband was shot.

In the video, Rakeyia can be heard pleading to her husband to get out of his truck. Her pleas to the officers asking them not to shoot him, can be heard as well.

The video was released to media by way of the family lawyers. Rakyia Scott took her cellphone and recorded the moment her husband and baby daddy was fatally shot by police.

Thought the video shows the moments before and after the incident, it does not answer the crucial question of whether Mr. Scott had a gun, as the police have maintained. 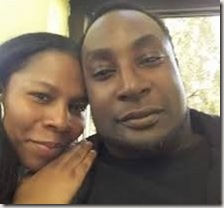 According to the lawyers, Rakeyia Scott had come out of the her apartment to meet her husband who had parked his truck in a visitor’s space in their apartment. Relatives maintained Keith Scott was waiting for one of his children to return from school, as he usually did.

Rakeyia Scott who was to give her husband a cellphone charger, noticed his truck was being surrounded by cops.

In the 2-minute video, Rakeyia Scott repeatedly asks her husband ‘don’t do it Keith” in a effort to get him to stand still. She also tells cops ‘not to shoot him” “He has no weapon” and “he didn’t do anything.”

She also explains to them her husband has T.B.I –a traumatic brain injury Keith sustained in a motorcycle accident in November 2015.

Mrs. Scott let’s officers now as well, Keith Scott had just taken his medicine and that “he is not going to do anything to them.” 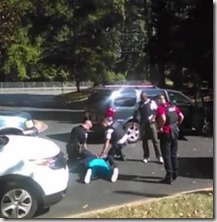 After the shooting Rakeyia Scott –who is not seen in the footage –keeps recording and tells to the officers “he better not be f***ing dead.

You can read the full transcript of the video here.

Police Department have yet to release the videos they have available and that clarify the situation.

Accoridng to her Facebook page, Mrs. Scott is a Customer Care Representative at Carnival Cruise Line. The wife and mom of four, attended ICDC College. She is originally from, Charleston, South Carolina and is currently based in Gastonia, North Carolina.