Kasey Jones a young barista from New York fell to her death less than a week from posting a photo of her feet dangling from a fire escape.

26-year-old Kasey Jones was seen drinking with friends on the roof of her apartment building on Vermilyea Ave. near W. 207th St. in Inwood. Drinking and climbing down the fire escape was something she did often, probably because  the the door to the roof has an alarm.

Kasey’s posted several photos of the view from her rooftop, but by far the most scary are the two showing her foot in the fire escape, the last one was posted a week ago. 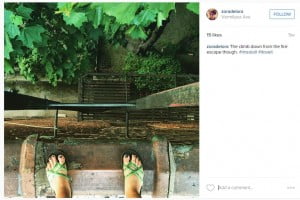 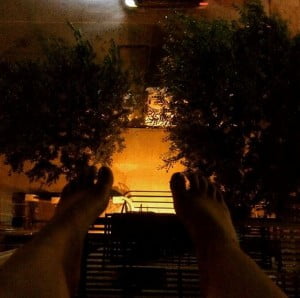 According to DNA.info Kasey was on her roof with  friend when around about 2:20 a.m. she decided to climb down, as she descended, she tripped and fell five stories down, landed  in the building’s courtyard where she died at the scene.

Kasey born in Seattle, Washington, she later moved to Wisconsin where she attended Superior High School. She graduated with a B.A., Studio Art, Business from University of Wisconsin- Superior in 2012.

Kasey worked at I Love Duluth as manger before she moved to New York in the summer of 2014. Once in NY she became a barista at 60 Beans Coffee & Tea and then at Plowshares Coffee. Kasey an avic biker was also a talented photographer.

I am a recent graduate of the University of Wisconsin-Superior looking to expand my horizons. Originally from Seattle, I have lived in Superior since I was young. I have moved to New York City and plan on advancing my career in photography, as well as my career in hospitality.