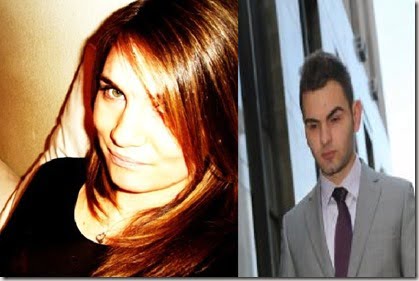 Heard about explosive couples? Well, here is one! The girl, 23-year-old born in Latvia Yakaterina Pusepa and the guy, Alec Katsnelson. Now, this couple should definitely not be left in the same room alone. Pusepa is currently facing trial for attempting to murder her boyfriend!

Yakaterina who resides in Manhattan, allegedly stabbed her man before he knew what hit him, and then dragged him down a flight of stairs from their apartment covered in blood. First reports said when her nightmare began in in the early morning hours of May 11, 2012. She was arrested when found covered in blood for the allegations. But since then she has changed her story a few times and on Tuesday the beauty testified:

“I was trying to get him off of me, make him get off of me.”

Yekaterina Pusepa was 22-years old when she was arrested last year.  She reportedly attended James Monroe High school and worked as a waitress and bartender. She and boyfriend had a history of violence; her boyfriend was arrested in March 2012 for attacking her, so perhaps the couple shouldn’t be together at all huh! She had been dating Katsnelson since November 2010.

After Pusepa nearly killed Katsnelson following their altercation she called the cops and everything went on down hill for her.

She is described as a beautiful girl, but since then her style has changed dramatically, take a look at her before and after pictures. She hardly looks like the same person. Yekaterina now 23, was a fun young woman with clearly a wild side. But she is looking rather old and weary yesterday at Manhattan Supreme Court.

Her version of the facts is that she was frustrated by her boyfriend’s drug use and she was just trying to scare him off and it was his irresponsibility what triggered the violence but Alec testified last week that Pusepa came after him after seeing a sext from another woman.

Either way they are not together anymore and Pusepa faces 12 years in prison and will likely be deported to Latvia if she is convicted. She and her mother left their homeland for California when she was 11.

According to the Dailymail, Pusepa was pregnant and said Alec asked her to had an abortion and she went through with the procedure after learning the child would have been placed in foster care.

Would you side with her?