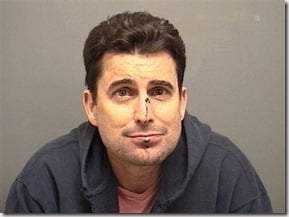 The ex-anchorman Rob Morrison, accused of choking and beating his wife of ten years, Ashley, had an affair with two attractive WNBC co-workers, according to the Daily News. The anchor resigned from WCBS-TV this week.

44-year-old Morrison was arrested on Sunday, accused of attacking Ashley Morrison in a drunken rage at the couple’s Connecticut mansion. Sources claim he cheated on his wife with two of his colleagues,

former WNBC anchor Jennifer Rainville and another unnamed co-worker, according to reports. She even wooed Rainville with drunken late-night voice mails after the birth of his now 7-year-old son.

Former WNBC employee Jennifer Rainville is very physically alike with Morrison’s wife. Rainville was once Morrison’s fiancée, and she wrote a novel based on their romance: “Trance of Insignificance” published in 2011.

Morrison also had an affair with a younger co-worker in 2006 while both were working at WNBC, according to The News. When pressed about the second alleged affair with an unidentified colleague, Morrison told the Post:

“Why would I say anything? So unless you want to talk about the Bruins or the Grateful Dead, I’m done bro.”

The second woman still works in the media. Her name is still unknown.

Ashley Morrison, who fronts CBS MoneyWatch, is from the South and has one child. The Daily News reports that she started dating her future husband around the same time he dumped Rainville. In an incident prior to his arrest on Sunday, Morrison had drunkenly choked his wife to the point where she almost lost consciousness.

Rob Morrison remains under court order to stay out of the $1.26 million home and keep at least 100 yards between him and his estranged wife. Morrison faces up to five years in prison if convicted on the top count of strangulation in the 1:30 a.m. fight that left him with a broken nose.