In an epic fail by the host of the Miss Universe event, actor Steve Harvey, he wrongly named Miss Colombia as the winner when in reality the title belonged to Wurtzbach.

By the time Harvey, a game show host in his Miss Universe debut, rectified his mistake, the Miss Universe crown was already in Miss Colombia’s head as her fans in the audience started celebrating.

According to her Miss Universe page, Pia was born in Stuttgart, Germany and grew up in Cagayan de Oro, Philippines. She has one sister who is two years younger than her.

Pia finished her secondary education with the ABS-CBN Distance Learning Center and studied culinary arts at the Center for Asian Culinary Studies in Metro Manila, Philippines. She worked as a cosmetics model.

She was actually a Child Star: At the age of 11, Pia signed with Star Magic Talent under the stage name of Pia Romero. She acted in multiple roles in TV and film.

Pia is currently a stylist and writer for the lifestyle section of a leading newspaper in the Philippines.

As the Philippines’ Inquirer (the newspaper for which Pia works) noted, this pageant queen “may be on top of the universe, but her feet are firmly planted on the ground.” Pia’s co-workers note that she “is more than just a beauty queen,” saying, “People love her because she is approachable and easy to connect with.” 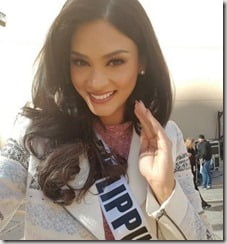 When it comes to the 26-year-old Filipina-German beauty love life, Pia denied media rumors that said she and president Pangulong Benigno Aquino III were dating.

Though it is believed she has a boyfriend, the question remains? Who is the lucky fella?

She is very close to Filipino Persian, football player, Misagh Bahadoran. But since he is dating another lovely Philippine named Sam Pinto, we’ll just say they he and Pia are very good friends.

Whoever he is, her mystery guy, he must be super happy about the success of his gal, the new Miss Universe 2015.