Didn’t watch last night’s Miss USA? Well, lucky for you, here we tell you all about the winner, Miss Oklahoma, Olivia Jordan!

The gorgeous 26-year-old was crowned Miss USA on Sunday in the pageant held in in Baton Rouge, Louisiana.

Miss Oklahoma along with Texas, Rhode Island, Maryland and Nevada made it into the top five: the winner was followed by first runner-up Yliana Guerra, 22, of Texas, and second runner-up Anea Garcia, 20, of Rhode Island. They were followed by 25-year-old Miss Nevada Brittany McGown, 25, third runner-up and then Miss Maryland Mame Adjei, 23. 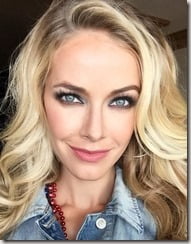 Born in Tulsa, Oklahoma; Olivia grew up to be a group fitness instructor and personal trainer.  The blonde is a graduate from Boston University, where she earned a B.S. in Health Science where she was one of the  Alpha Phi gals, running a self-defense workshop in her sorority.

Olivia has all the right credentials, as a model she was signed with NEXT models and has appeared in several national and international commercials and feature films, most recently, Hot Tub Time Machine 2, and has walked in fashion weeks in New York and Miami, the Daily Mail writes.

As a humanitarian, she was recognized as an outstanding advocate by Children of the Night, a group dedicated to getting American children out of prostitution and was the 2015 host for the Oklahoma Chapter Alzheimer’s Association Memory Gala. On her Instagram bio, there’s a direct link to the Alzheimer’s association. Olivia nailed the question from judges, she was asked what she thought the next hot-button issue was in the US that needed to be tackled on a national level?

“I think we still need to talk about race relations in this country,” Jordan said. “We have not solved this issue. We are still having problems. We keep hearing about new issues coming up. We really need to work on being an accepting society and being a society where every single person, no matter your race, no matter your gender, is given the same rights and privileges and opportunities.”

No doubt she has a bright future ahead, the 5-foot-11 seems to be the complete package but as far as her romantic life goes, she seems to be single which is odd because she must have several admirers and which makes us think she is waiting for Mr. Right.

Too bad the pageant was shadowed by co-owner Trump and his comments about those who enter the US illegally from Mexico as rapists and drug runners.

Still, Olivia got the crown. Find her on Twitter here.