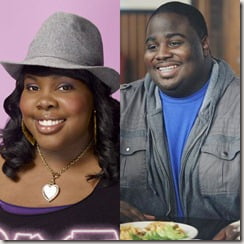 I have been hearing lately that Amber Riley has a new boyfriend, who is gonna be seeing her dancing on this 17 season DWTS! But who might be Amber Riley’s BF?

The pair has been seen shopping for engagement rings….***!

Some people who claim to be close to the couple are “convinced” an engagement is inevitable.

She’s madly in love with him

It is believed the relationship is “heating up”.

Amber seemed that in the season finale, it looked like girl was poised to get it on with character Sam. Since somebody thought that this was going to be a big shot it was set that he’d rather leave the show, an opportunity opened up to be Mercedes’ new squeeze.

LaMarcus Tinker….is he the mystery man who has stolen our diva’s heart? well, yes, but only on Glee!!!

We all witnessed Amber smiling as she arrive to DWTS rehearsals on Saturday afternoon (September 14) in Hollywood.

“Church time!!!! Maybe my pastor will give me a special prayer for tomorrow, I need one lol ttyl,”

He is an Actor, Writer, Producer and Director born in Houston TX. He is best known for his roles as teen football star Dallas Tinker on Cougar Town. He appeared as the frequent personality Shane on the third season of Glee.

Tinker went to West Briar Middle School, where he studied theater. He later attended the High School of Law Enforcement and Criminal Justice. He graduated as from NBCA Academy. He then received a full academic scholarship to University of Texas Arlington, where he studied English.

He will be making his major feature film debut in the role of Big Corporation for the high school romance The First Time.

Tinker is a film producer, and the owner of LRT Productions, LLC & LRT Interests INC. He is an Executive Producer on several feature films.