If you could imagine a woman’s worst nightmare we can assure you among the top 3 a woman and her period is on that list.

42-year-old Mexican actress and singer Patricia Navidad had one of those moments where you would rather just vanish from earth!

Navidad –who was looking all glammed up –was performing live on a popular morning show when she suffered a malfunction in front of thousands of TV viewers.

Right in the middle of her performance Navidad –who was wearing a short mini dress –lost her sanitary pad, that went right between her legs as she sang and as TV viewers most likely enjoyed their breakfast! 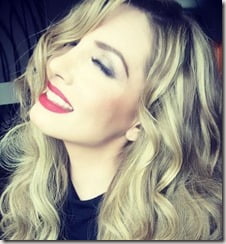 After the embarrassing situation was caught on tape it quickly went viral, forcing the soap opera’s star to clear the air, tweeting:

“It fell by itself through a very sophisticated tunnel! Thank you, I love you.”

This is not something I should be ashamed of or be mocked for.

The nerve-racking moment hardly made her flinch reports say, and like a true professional she kept singing and dancing around the pad which could be easily spotted on the wooded stage floors of morning show “Despierta America.”

Guess the show must go on huh!