Eileen Davidson started her career as a model in Mexico City and California, eventually adding commercials and print work in Europe. She turned to actin and quickly landed the role of of Ashley Abbott –for which she is widely known –on The Young and the Restless in March 1982. She played that role for 6-years.

Accoridng to her website, Eileen then appeared as Kelly Capwell on Santa Barbara from May 1991 until the soap’s cancellation in January 1993. She next appeared as Kristen Blake on Days of our Lives beginning in May 1993.

The blonde has been involved in a number of other projects including, being part of a clothing company (Femmeology), writing her own mystery novels, and being a spokesperson for the “Nubrilliance.” She’s also graced the covers of many magazines.

In 2014 she won a Daytime Emmy Award in the category Outstanding Lead Actress after being nominated for the third time. 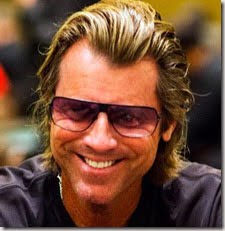 Vincent Van Patten met Eileen in 2000 while he made an apparition on the Young and the Restless.

Eileen was previously married to actor Christopher Meyer in the mid 80’s. Her second husband was, actor Jon Lindstrom to whom she was married from 1997 to 2000. Recent reports show her first marriage turned ugly and according to court records she and Meyer were both served with restraining orders.

You might recognize Vincent Van Patten from his job as host of The World Poker Tour. The son of actor **** Van Patten, Vince launched his career at the age of 9, starring in a Colgate commercial. He went on to guest star in over three dozen classic television shows, including “Bonanza,” “High Chaparral,” and “Adam 12.” He also starred in such television specials as “The Bionic Boy,” “Gidget’s Summer Reunion,” and “***** Dozen III.”

According to a profile; aside from his achievements in the entertainment industry, Vince is a remarkably talented tennis player who competed professionally through the mid-1980s. At his peak he ranked 25th in the world, scoring wins over almost every major player including John McEnroe.

Vince’s passion for poker started at the young age of 13, when his father taught him how to play poker at the LA Tennis Club. Soon Vince was playing in side games in between tennis matches. By the time he turned 16, Vince had accumulated enough skill to play in his Dad’s poker game. One night on a winning streak, he played until 7AM, when he finally had to throw in the cards to go to school. Vince continues to play poker every week with his buddies in a pot limit game in Beverly Hills.

The 58-year-old former tennis pro, has tried his hand at the World Series of Poker three times, and brings solid experience hosting televised sports and poker broadcasts to the World Poker Tour.

In December of 2015 he announced he was working in a new film project about the L.A. gambling scene.

You can find Vincent Van Patten on Twitter here.