John Donaldson is the current beau of TV personality and actress, Vanna White –whom you know as the long time hostess of Wheel of Fortune, the most successful game show in television history.

John’s girlfriend has been a staple on the hit TV show for over 30-years. The South Carolina native was born February 18, 1957. She began her long time Game show co-host career in the early 80’s after she was hired to substitute the then Wheel of Fortune hostess, Susan Stafford.

Prior to the Wheel of Fortune, Vanna was a struggling actress who had appeared in low budget films.

Her increased popularity after she appeared on Wheel of Fortune saw her release a best-seller autobiography ‘Vanna Speaks!,’ as well as baring it all in see-through lingerie photos that made their way on the cover of Playboy Magazine.

At the time the photos caused quite an uproar and Vanna said said in a lawsuit she did not give permission to Playboy to publish them. She later dropped the suit and appeared on Johnny Carson asking for forgiveness.

Vanna’s hosting opened for her a number of other opportunities. In 1988, she appeared in the NBC television film Goddess of Love.

She has made cameo appearances on television shows such as L.A. Law, 227, Super Mario Bros and others. She served as guest timekeeper for WrestleMania IV. In 1992, the Guinness Book of World Records recognized White as “television’s most frequent clapper”. In 1996, she was the main narrator and singer in the CD release of Leslie Bricusse’s “Santa’s Last Ride.”

White who was previously married is the mother of two adult children. In 1990 she wedded businessman George Santo Pietro. She and the restaurant owner welcomed two children, son, Nicholas, born in 1994 and daughter, Giovanna born in 1997.

She and San Pietro divorced in 2002 –after 12 years of marriage. 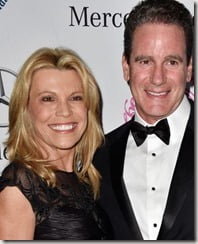 Following her divorce, she was in a relationship with Michael Kaye, the two were engaged at some point but they never made it to the altar.

John Donaldson and White met after they were introduced by mutual friends in 2012, the two have been in a relationship ever since.

Donaldson is a hunky and super successful Licensed General Contractor who began his own business in 1992.

John R. Donaldson is the president and founder of JDC. According to its website, the company is noted as one of Southern California’s premier construction companies specializing in the restoration and rehabilitation of multifamily properties.

The Santa Monica native made his way up by working hard. He had a number of jobs from packing lumber to carpenter before he landed a job in a construction and development company, where he served as a lead foreman on framing crews working on high-end custom homes in the Hollywood Hills.

As he and a partner went solo, they struck luck following the Northridge earthquake, suddenly they had more work than they could handle.

‘Now recognized for its expertise in multifamily restoration and rehabilitation, John’s company was selected to undertake several major projects, including a two-year contract to rehabilitate a 615-unit, 16-building, 19-acre property in Alameda, California. JDC’s success in completing this $35 million assignment led to several others in areas of the state far from Southern California, including Napa, Pinole, Piedmont, Davis, San Jose and even Seattle, Washington.’