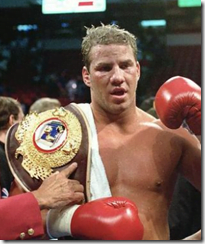 Meet the “Duchess “ Trisha Harding she became Mrs. Morrison in 2011. During that time she was the former champ’s caregiver and wife. The former champ who in recent years wrote books and owned a gym never got through the HIV scarlet letter. Trisha was with him when he passed on Sunday September First of “respiratory and metabolic acidosis and multiple organ failure.” while at a Nebraska hospital.

The Duke had a high profile acting career as well allegedly tested positive for HIV three years after he won against George Foreman and became the heavyweight champion.

Two years ago Trisha who is an English native and former tennis player gave an interview on the Jan. 23, 2011 edition of The Ringside Boxing Show titled “The Women Behind The Champs.” Trisha actually cleared the record saying they were not married and admitted that she had never seen “Rocky V” when asked:

What keeps him going after all the negative media?

“the women behind the man”

Trisha also revealed the story about how they met. She actually heard about him in 1996 when she was in charge of booking airplanes together from England to come to Las Vegas but she couldn’t get any room that week because of this “Morrison guy fighting”, and she got mad because she had to cancel a complete flight coming to Las Vegas because of him…Then in 2009 Morrison walks in the hotel she was working at in Wichita and she actually wondered whether to punching in the face or be nice to him but she ended up being nice to him and they have been together ever since.

When asked about the “false HIV diagnose”

he is not HIV positive and neither Am I

How challenging is to keep your relationship going?

With the support of Tommy’s fans and one very special person – who shall remain anonymous – I was able to receive a check today for the $5000 payment to bail Tommy out.” Most recently on August 15 she posted to Facebook

“Duke is on the road to recovery after being diagnosed with “Miller Fisher Syndrome/Guillain Barre Syndrome”….(google it!)…odds of ever getting this is ONE IN A MILLION.

There is not much more info about her, she was not the public media junkie type but she was definitely the Duke’s biggest support and fan.

You can listed more of the interview here.