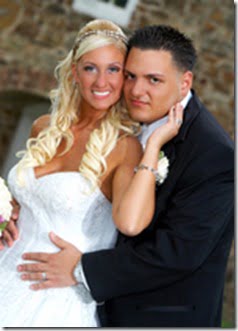 Oh-oh! Veteran NYPD officer Peter Ciollo was caught cheating on the spot by his wife and mother of his child! Toni Ann Bongailas discover her husband having *** with a 16-year-old in their bed! But that is actually the least of his problems right now. Toni’s husband is being charged with attempted rape, giving alcohol to a child, endangering the welfare of a child and sexual abuse.

According to the report the officer was off duty when he allegedly gave alcohol, showed ****ography and took the 16-year-old to his bed earlier this month.

Toni Ann and the disgraced 29-year-old policeman met back when they were just teenagers. She was born  February 25, 1983. The couple married during a ceremony held at Holy Child R.C. Church, Eltingville, that was the setting for the marriage of Toni Ann Bongailas and Peter Ciollo back in July 11, 2009. The catholic ceremony was followed by a reception in The Renaissance, Grant City and honeymooned in Mexico at Riviera Maya.

Toni is daughter of Loreen and John Bongailas of Annadale; she has a sister named Alexis Bongailas and a brother Victor Bongailas. The 30-year-old is a graduate of Tottenville High School, she received an associate’s degree in liberal arts from Kingsborough Community College, Brooklyn, and also has a B.S degree in nursing from Wagner College. She worked as a senior patient care assistant with Staten Island University Hospital, Prince’s Bay.

Her husband Peter who is a graduate of Monsignor Farrell High School, Oakwood, earned a bachelor of science degree in network management from DeVry University, North Brunswick, N.J. And became an officer with the city Police Department in 2006.

On his Facebook page that has since been blocked since he is being investigated, we find different pictures of him and his family vacationing and attending parties and fancy dinners.

Bongailas’ hubby needs to  give some pretty serious explanation to this whole mess he is in right now, specially being a cop he certainly knows that if you get caught nothing good is coming after. Toni’s husband of four years was suspended without pay from the 120th Precinct.
Toni Bongailas along with husband and son live in a Staten Island neighborhood called Willowbrook.