Thomas Arklie is the boyfriend of 46-year-old actress, Pauley Perrette. His NCIS actress girlfriend had a life threatening scare after she was assaulted overnight! Pauley, –who is best know for portraying g Abby Sciuto on the U.S. TV series and is also a published writer –said on social media, she is grateful to be alive!

Perrette was the victim of a “psychotic homeless man” according to a note describing the horrible scene she posted on her Twitter account. In it, she describes how a homeless man by the name of William said was going to kill her while punching her repeatedly on her face.

Pauley was walking from her Hollywood home to a guest house when the scary episode took place. When she finally was let go by the disturbed man, she says she collapsed on the sidewalk and a dog licked her face, while the dog owner did nothing to help her.

She managed to text a friend and later drew a sketch of her attacker for police and her friend who took a picture of the sketch later found her attacker and got him.

Pauley wrote she was shaken and traumatized,” adding “My life changed tonight.” 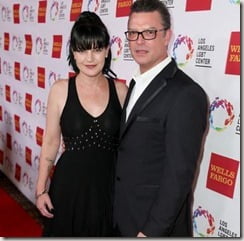 Last year, it was reported by the Daily Mail, Pauley was fighting to extend a restraining order against, ex-husband, Francis ‘Coyote’ Shivers indefinitely, as the pair have been locked in an exhausting legal war since divorcing in 2004 after just three years of marriage.

Thomas Arklie, is a former British royal marine and male model. The 53-year-old studied at the Royal Marine Commando and Basingstoke Technical College. He’s worked at the California Science Center as a dive technician.

He and Pauley have been dating since 2011. She told CBS Watch Mag during about her man: “It never occurred to me to go out with someone who’s happy and fun. There have been many disasters. We have fun together.”

Thomas Arklie is currently in the restaurant business in L.A. They lived just a few blocks away from each other for almost a decade and finally locked eyes while at a bar.

Thomas Arklie and Pauley had been at the same places but never met. Thomas Arklie had done a wrap party for NCIS and she had been there. When they finally met, he had no idea who she was.

Thomas Arklie and his gal have announced their desire to get married but are both supporters of the LGBT community and said they won’t wed until gay marriage is legal in every state.