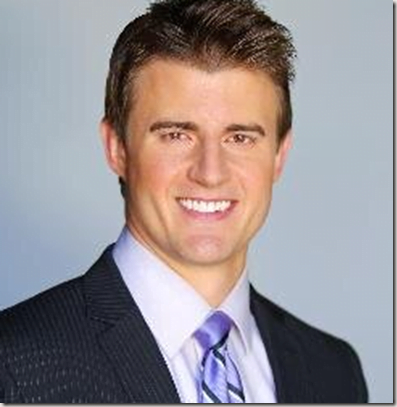 Meet Steve Kuzj, his face is probably familiar to you, he’s a reporter with KTLA and yesterday he was caught on camera pushing an alleged intruder out of his shot!

Steve who was on the streets of Hollywood when the guy tried to  get some TV time, without thinking about it Steve can be seen shoving him. He went to twitter to say he was defending himself and the viewers from hearing obscenities. He joined KTLA as a general assignment reporter in April 2013. Prior to moving to L.A., Steve worked as a multimedia journalist and anchor for the ABC station in Phoenix. He also spent time reporting for CBS in Atlanta. He attended University of Minnesota, graduating with degrees in journalism and business. Over the years, Steve has received numerous Emmy nominations, and has won for “Best On-Air Reporter.” When he is not reporting, the Minnesota native loves hitting the gym, he actually has a second-degree black belt in mixed-martial arts and has been doing karate since he was just 5 years old. His bio on KTL warns about bad guys staying away! Guess the guy Steve pushed didn’t read that part!