Stephen Mortimer is the boyfriend of 34-year-old TV personality, Gemma Collins. In an unexpected twist the reality television star and writer could leave the house of Celebrity Big Brother for the second time!

The blonde who made her TV debut after appearing on the hit ITV2 reality show ‘The Only Way Is Essex’ in 2011, became an instant hit with the public for her bubbly personality and great sense of humour. Having attended the Sylvia Young Theatre School as a child, Gemma was always destined to become a star performer. Her website claims.

From a very early age she was noticed by industry moguls and secured starring roles in theatre productions such as The Sound of Music. Gemma has also appeared on ITV2’s ‘I’m A Celebrity… Get Me Out Of Here NOW.’

According to the Daily Mail, in scenes that will air today, Gemma can be seen confiding in Taffany Pollard about being pregnant!

Collins who’s admitted in the past about her struggles with food, previously experienced an abortion in 2011 and also suffered a miscarried in 2012.

The My Real Life as an Essex Girl author, and her then boyfriend Rami Hawash were engaged for a short period of time in late 2013. She also used to date, cocaine dealer, Alex Moss. 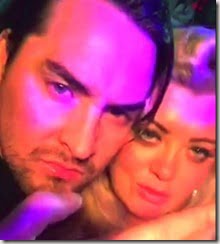 Gemma who is also a fashion designer and boutique owner, found love again in the arms of Stephen Mortimer. Gemma has a history of going after the bad boys. Her relationship with Moss ended after he was arrested for assaulting her over a year ago.

Criminal Stephen Mortimer has been thrown back to the can, wile Gemma is in the popular show. Her convict lover is currently behind bars for 28 days.

Stephen – who previously spent two years in prison for grievous bodily harm (GBH) – handed himself into police on Tuesday after he breached his license terms, which stated he must reside at his sister’s home, by recently moving into Gemma’s lavish abode in Brentwood, Essex.

I’m upset I can’t be there as she walks out of the CBB house but I’ve waited for her, she can wait two weeks for me!’

Gemma will also have to face with rumors of Stephen Mortimer cheating on her. According to reports, 21-year-old Rebecca Smith admitted she and Stephen Mortimer slept together several times behind Gemma’s back!

Stephen Mortimer has a series of convictions, including for violence and drug offences.

According to The Sun, the couple met in Essex’s Sugar Hut nightclub.

Will Stephen Mortimer be a baby daddy soon?