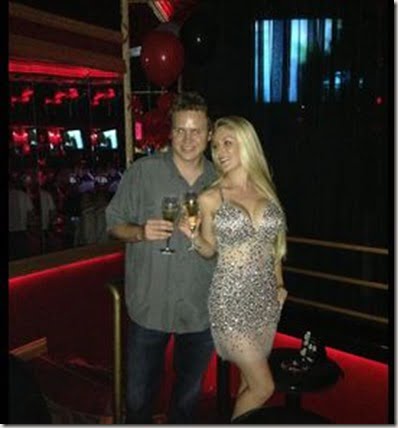 30-year-old Spencer Pratt and his wife, Heidi Montag  or “Speidi” don’t need that much of an introduction. To speak about him is to speak about Heidi.

We first heard of Spencer and Heidi and their controversial love story when it played out on reality TV show The Hills –the how which launched them both as TV stars eight years ago –so this two are no strangers to the camera at all. In fact they are known as one of the most hated couple of reality TV.

Both TV personalities started dating being cast members  of The Hills and we all saw how that rubbed Lauren Conrad the wrong way and she and Heidi’s feud became the central focus of the series. Their feuds with the show’s sweetheart Lauren Conrad assured them of instant infamy, while their antics on Celebrity Big Brother last year saw them being booed off the stage after securing second place behind eventual winner X Factor’s Rylan Clark. Spencer and Heidi have been inseparable ever since, they tied the knot in 2009 but the couple doesn’t have any children, instead they blew a $10 million fortune! In 2010 his wife famously underwent ten plastic surgery procedures in one day, including having her breasts increased to a size F.

A combination of excessive spending, ludicrous amounts of plastic surgery for the missus and a natural ability to irritate large portions of the general public without even trying have ensured their status as one of reality TV’s most infamous couples. The couple now seems to have some regrets about their past and some wonder why they simply didn’t remove themselves completely from the public eye and start afresh? To what Spencer has said

‘We have tried,’ says Spencer, ‘and we are trying. But when you get offered good money, it’s hard to say no,’ he admits. ‘It’s hard to get normal jobs too. How can I be a cook in a kitchen or a waiter in a restaurant? We’ve made it so that we can’t blend in and it’s hard now to jump into obscurity.

It almost makes you feel sorry for them right, almost! Spencer was born in Los Angeles on August 14, 1983, he has one younger sister Stephanie, who was also seen on some of the episodes of The Hills. Pratt left school to pursue a career on TV and re-enrolled in 2011. Last year he completed his undergraduate degree in Political Science from USC.

Most recently Spencer is all about getting fit, he instagrams pictures of him looking excited/ exhausted at boxing lessons.

It was reported the marriage of five-years would be featured in Celebrity Wife Swap as they go up against 7-time Olympic medalist Amanda Beard and her husband, Sacha Brown. Excited to watch?

Whether you love to hate him or hate to love him, you can find Pratt on Twitter here.