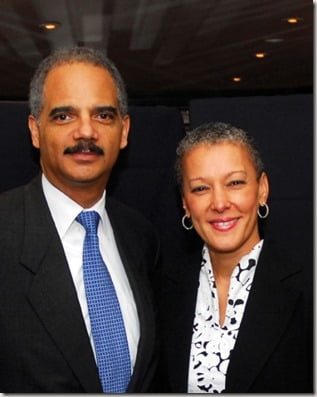 Meet MD. Sharon Malone, the wife of Attorney General Eric Holder. Often referred to as “The first lady of justice”

Her husband had a health scare earlier today, when Holder who according to his former aid has always been in great shape, experienced faintness and shortness of breath during a morning meeting.

The 63-year-old who takes the stairs to his fifth-floor office at Justice Department headquarters without losing his breath was taken to MedStar Washington Hospital Center. At the hospital Holder, who was described as “alert,” conferred with doctors who sent him home to rest at 1:15 p.m., according to an agency representative. 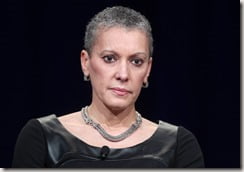 Sharon Malone who is an Obstetrics and Gynaecology Surgeon is the sister of Vivian Malone Jones. The Alabama native is the youngest of eight; she graduated *** laude from Harvard University in 1981, Malone went on to pursue a career at IBM as a systems engineer before attending medical school at Columbia University College of Physicians and Surgeons in New York City. According to her bio on foxhallobgyn, she then completed her residency at the George Washington University in obstetrics and gynecology.

She has been in private practice with Foxhall OB/GYN since 1992. 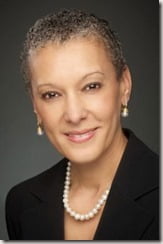 The 55-year-old, professional and mother of three has delivered more than 500 babies in the D.C. area alone, according to a 2009 ESSENCE.com article.

Even thought she is obviously  aware of hubby being the first African-American to lead the country’s Justice Department, she says about the stereotype political wife.

I don’t fit the mold of a traditional political wife, but that’s all changed now. You are seeing a lot more professional women with careers. But the thought of me staying home has never occurred to me. I have worked too hard to be where I wanted to be not to pursue it to the fullest.

Wonder why she isn’t Sharon Holder? She explains why she never took her husband’s name

it had to do with where I was professionally. I was already Dr. Malone when we got married. There was never a thought about it. Part of it was also paying homage to my parents. There had never been a Dr. Malone in our family.

She is the mother of the couple’s three children, Maya, Brooke and Eric. In 2012 the couple of 25-years was featured as part of HuffPost BlackVoices weekly series counting down the top eight power couples of the year. That same year, the obstetrician, appeared in the 90-minute PBS documentary “Slavery by Another Name”

Did you know she and hubby are allegedly the co-owners of a clinic engaging in apparent non-legal abortion activity? What do you think about that?