On June 6, both Matt and Sweat escaped from the maximum security Clinton Correctional Facility in Dannemora, New York, about 20 miles south of the Canadian border, giving place to over 1000 law enforcements officers being involved in the search. 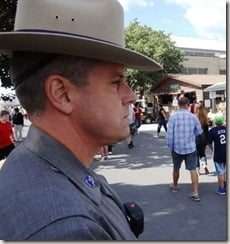 On Friday Matt was shot and killed by authorities Friday in Elephant’s Head, New York; two days later Sgt. Cook –who was alone at the time –spotted Sweat and made a brave decision.

According to reports, Cook was supervising a perimeter post when he spotted Sweat on a road near Route 30 in the area of Constable, New York, approximately 1.5 miles south of the Canadian border. Cook ordered him to stop, but Sweat then turned and fled across a field.

Fearing he could loose him for good, he opened fire and shot David twice injuring him in the torso.

Following a 23-day manhunt Cook, is the man of the hour indeed; instead of calling for backup he decided to act alone and became a hero for it.

Even New York Gov. Andrew Cuomo labeled him saying “I said to Sgt. Cook … to go home tonight and tell your daughters that you’re a hero.”

Cook who belongs to Troop B, is a 21-year veteran who has spent most of his career in the area. He is also a firearms instructor.

Jay Cook is married to wife Carrie and together have two teenage daughters, ages 16 and 17.