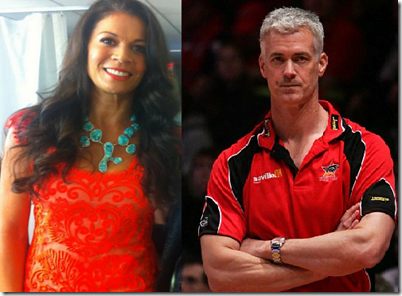 Whoa! That was fast! It appears “Mrs. Eastwood & Company” is literally having some company already! According to The National Enquirer former reporter, T.V news anchor and 17-year wife of major actor and Hollywood producer Clint, has not only confirmed her separation to her famous hubby but is allegedly already in love and in full throttle romance with an old flame!

Dina who earlier this year treated herself for problems with “depression and anxiety” seems to have found comfort in her hunky high school boyfriend Scott Fisher! And just who Scott Fisher is? Fisher was born July 20, 1963; he is of Australian roots but raised in San Jose, California. He is a former Basketball player turned coach. He was the head coach of the NBA’s Perth Wildcats and is currently assistant coach at the University of Hawaii.

And maybe because of her Hawaian roots or maybe for some other reason, Dina’s twitter feed says

Morgan’s mom, Lucky Step-monster, and recipient of love from the coolest family and friends i can imagine.

According to his LinkedIn profile Scott attended Mission San Jose High School-just like Dina- graduating in 1981. Fisher then studied at the University of California in Santa Barbara from 1981-1986 getting both BA in Philosophy and BA in Communication Studies.

He played proffesionally during 6 years for the North Melbourne Giants from 1987-1993 in Melbourne, Australia. He played for the Wildcats for 8 years and in 2001 he change careers working as a Real Sate Sales Agent for Mack Hall and Associates from September 2001 – April 2004. Then from 2004-2008 he returned to his passion and to the Wildcats but this time as the team’s head coach. In 2010 and for the past three years he’s been the assistant coach at U. of Hawaii.

Well true romance or not, we can not blame Dina for her taste! He is certainly no Clint Eastwood but he’s got major looks!

His personal interest include “Sports of all kind, Cycling, music”