Hilary and the famous communicator apparently met through mutual friends and have been spending time together getting to know each other. TMZ reports say they made it official last month. 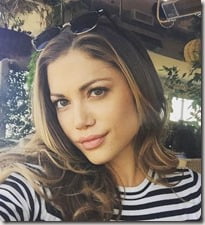 The gorgeous 26-year-old has Spanish +Mex +German roots. The actress and model is a Louisville, Colorado native. 2007 was a big year for the pretty gal, she graduated from Centaurus High School and became Miss Teen USA. Following her win she put on hold her plans to attend college and decided to pursue her passion for acting.

She currently attends the New York Film Academy. Cruz was also seen in Donald Trump’s new MTV reality show Pageant Place. In 2012 she appeared in Michael Addison’s music video “Come Back to Me.”

We assume Ryan would be her first high profile relationship, after her association with him, we’ll sure hear more about the up and coming actress.