Rain Dove was until recently the boyfriend of actress-turned-activist Rose McGowan. The two dated for over a year but are now over each other.

Rain’s former girlfriend became in recent years, one of the first people to accuse disgraced Hollywood mogul Harvey Weinstein of assault in 2017. The “Charmed” star who has also appeared on Scream, Going All The Way, Planet Terror and Fifty Dead Men Walking -has been linked to Marilyn Manson and was married to visual artist, Davey Detail form 2013 until 2016. She also dated Jordan Asher in 2016.

She and Rain Dove were first linked together in early 2018. They met to give Rose advice on allegations she was transphobic. 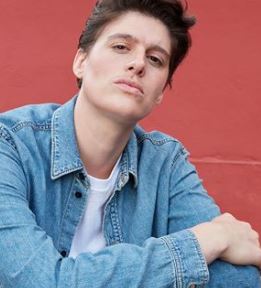 Dove is also in the industry and works as model, who identifies as nonbinary as a result he uses they/them pronouns. He was born as Rain Dove Dubilewski on September 27, 1989. The Vermont native has made a name as a gender-nonconforming model and staunch LGBTQ advocate.

He’s been called the ‘androgynous model of your dreams’ and credited as ‘transforming the fashion industry’ and ‘challenging gender norms’ -On social media they describe themselves as ‘GENDER CAPITALIST representing “human” in fashion, film & activism’

In recent months, they made headlines after admitting to selling TMZ incriminating Asia Argento texts. Last month the 30-year-old came clean in lengthy video in which he also admitted to lying about going to UC Berkeley and being a firefighter.
In the texts, the Italian actress and one-time #MeToo leader appears to admit to unknowingly having *** with a minor. Dove also revealed he was paid 10k by TMZ.

Instead of obtaining a bachelor’s degree from Berkeley in genetic engineering like they had claimed in the past, truth is them attended a nearby Berkeley City College. Dove also admitted to never working as a firefighter, a claim made in multiple interviews. Instead of firefighting, Dove worked as a wildfire prevention officer.
In the cofession video, they also admitted to cheating on Rose during their relationship.