Quinyetta McMillan is the devastated wife and mother of Alton Sterling’s children. Her 37-year-old husband is the Baton Rouge man, who was shot and killed by two police officers earlier this week.

Quinyetta McMillan delivered a heartfelt speech denouncing the death of her husband and how has impacted her and their son, Cameron, the couple’s oldest child of five, saying

he has had to watch his father be killed over and over again as the video of his death is shared around the world.

During her speech at the press conference this morning, Quinyetta McMillan’s 15-year-old son broke down and had to be held by supporters.

The image of her and her son is very powerful, she speaks candidly about how police ended with the life of her husband and then walks away, clearly in unimaginable pain.

“You will see with your own eyes how he was handled unjustly and killed without regard for the lives he helped raise,” 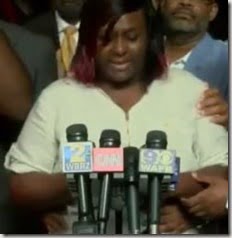 Quinyetta’s husband, a 37-year-old Baton Rouge black male, was shot at least five times by two police officers, the incident was caught on tape by a nearby witness.

Sterling was selling CDs outside the Triple S Food Mart, at the corner of Fairfields Avenue and North Foster Drive, WAFB-TV reports. Two officers arrived at the scene after receiving a disturbance call in which the caller said someone had been threatening him with a gun.

Thought reports say Sterling did have a gun with him, witnesses say he was not holding it when police arrived. His cousin told media, he would have been too scared to fight police.

The strong images of the video, shows two white officers, wrestling Sterling to the ground before gunshots are heard.

Quinyetta McMillan said the shooting had left his children without their loving father. A man who ‘simply tried to earn a living to take care of his children’ –children who depended upon their daddy on a daily basis’.

Sterling was the father of at least five children, all under the age of 15, with Quinyettas’ son, Cameron, being the oldest.

Quinyetta McMillan had kind words to thanked those who expressed condolences but she was also adamant to say this event will not go unnoticed, “I, for one, will not rest or not allow him to be swept in the dirt.”