You don’t want to miss Tuesday’s episode on “Knock Knock Live” –the Fox’s reality series that enlists friends, families, neighbors and celebrities as it knocks on participants’ doors to surprise them with anything from a chance to play basketball with an NBA great to a cash windfall! This is the time for Quinceanera Ashley!

Can you imagine having your idol knocking on your door and making your wildest dream come true, seems like a long shot right, but in the Fox series, produced by “American Idol” host Ryan Seacrest anything is possible!

In the second episode of Knock Knock Live singer Justin Bieber will be seen fulfilling the dreams of not one but two of his fans.

One of them is Ashley a 15-year-old girl who gets to be escorted by the 21-year-old singer to her birthday party. In the clip Bieber also makes a stop in LA to another fan who has son with Down’s syndrome.

The “Where Are U Now” singer gets the chance to surprise her fans and even gets emotional when little Noah accompanied his dad on stage to sing. Bieber who has two young siblings has plenty of practice with little one and is moved to tears at the local church stop. 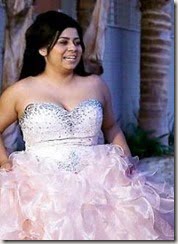 During Ashley’s turn, she is seen wearing a pink dress by the arm of the singer. Ashley has no idea she is being taken to her quinceanera party but once she gets inside the limo with Justin she knows she’s in for treat!

At one point Justin says “I love you Ashley” and the teen –who is of Hispanic roots –replies “I love you Justin.” Cool huh!

Not much more is know about pretty Ashley but if you want to find out more don’t miss Knock Knock Live!