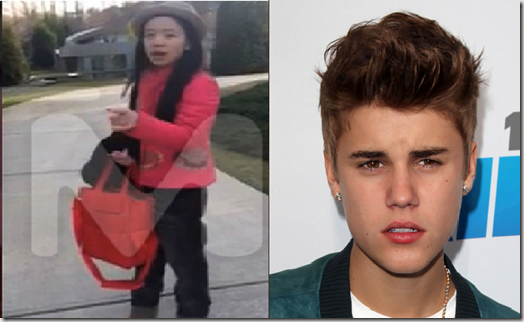 PinTalking about bizarre situations! Reports online are accusing Qianying Zhao of having entered into Justin Bieber’s rented house in Atlanta on Wednesday and falling asleep in one of the bedrooms!

The Asian chick identified as Qianying Zhao was found by the the landlord’s niece who was in shock when she realized “an Asian female” was sleeping in the residence, police was called to the scene.

As weird as it might be, the embarrassing moment has a bit more of a funny flair than a scary stalker case. You can watch the video here.

The tiny woman described by TMZ who seamed to be more scare than harmful was put in ‘double lock’ handcuffs behind her back.

So what’s her story? Apparently if she is saying the truth, it looks like someone had a really good laugh on her expense! It sounds like young and petite Qianying Zhao fell for it and was played really low! According to her story she showed up at the 20-year-old singer’s Atlanta Mansion because she had been asked to a birthday party! When she got to Bieber’s rental, however, no one appeared to be there and she figured she had arrived too late to the festivities.

Instead of leaving, she allegedly let herself in simple because the door was open. Once inside, she made herself at home! After all she also said she and the Biebs had met over Twitter! So she probably thought it was ok to have a snooze??

The clearly bad idea resulted in her being arrested for criminal trespassing. Sadly for her but luckily for Justin he is away on a trip with his dad and entourage. So let’s say Qianying Zhao was more than just late. This goes to show even though the famous singer has been in major trouble with the law lately he still holds the love of some of his most loyal fans!