Peter Weber is the newest hunky Bachelor and he is more than ready to make the respective rounds to promote the upcoming season which airs tonight!

Weber first came under the radar after appearing in the fifteenth season of The Bachelorette, during Hannah Brown’s season. But as you might recall, Hannah left the nation in shock when she decided to end the relationship.
Of course, he was later chosen as the lead bachelor in season twenty-four of The Bachelor.
Now is time to get to know him better, for the second time.

28-year-old Peter Weber was born August 4, 1991; he is a native of Westlake Village, California. According to his ABC bio, he was raised with a strong example of the marriage he wants by his loving parents who set the bar high after decades of marriage. As an interesting fact, his parents met while working on the same flight over 30 years ago, thus setting the perfect example of lasting love. 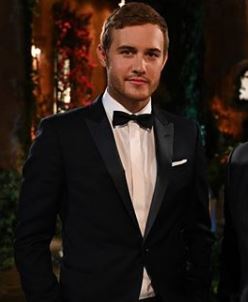 Peter is one of two sons, he along with his brother Jack, followed a career in aviation.
At 23, Peter was working as a pilot; and by 25, he landed his dream job as captain for a major commercial airline. He is currently employed by Delta Airlines.
Peter who has Cuban blood running through his veins thanks to his mom, has embraced the culture and enjoys letting loose on the dance floor. He also enjoys Cuban cuisine.
Is safe to say Weber is more than comfortable on screen, he also had an acting role in the short film, In the Dirt. Peter who is also active on social media, often shares images of his flying.

Thirty women will compete for a chance to win the pilot’s heart, do you have your favorite yet?