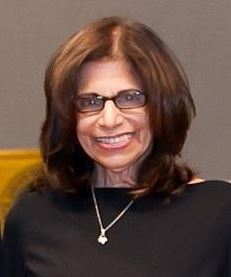 66-year-old Patricia Ward was killed yesterday during a gruesome attack by her own son.

Derek Ward decapitated his mother Tuesday and then killed himself by stepping in front of an oncoming Long Island Rail Road train, Nassau County police said.

Ward has been identified as a beloved teacher from Farmingdale State College; the vice president of institutional advancement at the college, told the Post:

“We are in shock,” “The staff in her department is teary-eyed. We are providing counseling to the staff who need it. It’s a very sad day. A lot of people are taking it very hard.”

Patricia had in fact worked for 28 years at Farmingdale, she was a faculty member and taught language arts, she was also a former dean.

Her son who was 35 is described as a mentally ill individual and had also a drug problem, according to media reports.

As much as neighbors wanted to believe it was a tasteless Halloween prank when they saw the body who according to witnesses, was dragged by her son after he committed the murder, it was sadly the well-known and well respected body of Ms. Ward.

The crime took place at her apartment in Long Island. Her son, then proceeded to take his mother’s lifeless body out of the Farmingdale apartment and into the street where he kicked her severed head.

While the body of Patricia lay on the street without a head and many just decided to ignore it, her son was stuck and killed about 25 minutes later and a mile away from Patricia. When police was called that a Long Island Rail Road had ran over a man, the dots were put together.

According to a report from CBS, Derek who used a knife to commit the crime, had been arrested years ago for gun possession and criminal mischief.

According to online records, Patricia’s relatives include John, Robert, Muriel, Linda and Becky Ward. Prayers to the rest of her family.