Hearing about High School students being the victims of another student, is sadly and alarmingly not very shocking anymore. This morning the parents of around 20 teens at Franklin Regional High School have had the scare of their lives when it was reported a male 10th-grade student went on a stabbing rampage injuring at least 20 people, authorities said.

Initial reports say seven teens are being treated at the Forbes Regional Hospital with stab wounds to their torso, abdomen, chest and back areas, Dr. Chris Kaufmann told CNN. The hospital also admitted one adult who was a security guard at the school. 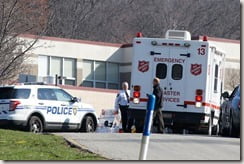 Several of the hospitalized victims from the Franklin Regional High School outside of Pittsburgh suffered life-threatening injuries, Kaufmann said, the good news is all of them are expected to survive.

The stabbing took place in several classrooms and hallways as the school day began. The suspect, a 16-year-old sophomore was described to be “just running down the hall stabbing kids as they were going by.” Said the vice-president of the security company that had personnel at the school.


In the middle of the 15-minute-horror there was a brave young man, Nate Scimio who’s quick thinking might have saved others. He was the one who pulled Franklin Regional High School Fire Alarm after being stabbed!

Scimio is being held as a hero and he totally deserves the title, authorities said the move to pull the fire alarm prevented more stabbings — and possibly saved lives!

Nate was being lauded all morning on Twitter by users following the stabbing. Nate who according to his Instagram photos works the parking lot at church, (pictured below)

Also posted a picture of himself from the hospital where he is being treated. He is seen taking a selfie and wearing a hospital gown. His right arm is also bandaged.

Nate or better said “the definition of a modern day hero” who just a couple of weeks ago enjoyed of a trip to Disney also allegedly saved another student from being stabbed. Buzzfeed reports Nate Scimio pulled the fire alarm after stepping in front of a knife to protect a female classmate.

You can find this young-brave-man on Instagram  here. Well done Nate! we wish you a speedy recovery! Prayers for the rest of the victims.