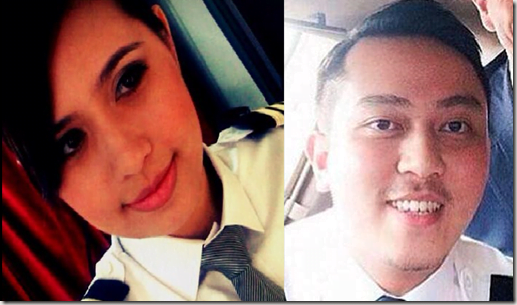 Meet Fariq Abdul Hamid –the first officer of the missing MH370 –fiancée. It’s been reported the 27-year-old Fariq, was planning to marry a fellow pilot from another airline.

She is Capt. Nadira Ramli who currently works with AirAsia. The 26-year-old is a daughter of a senior Malaysia Airlines pilot.

According to a report in the Sabah-based Daily Express she is accompanying Fariq’s distraught mother at an undisclosed hotel in Kuala Lumpur. Several news portals claimed that Nadira has been given a month’s leave to enable her to weather her sadness over her boyfriend’s disappearance.

She is the youngest child of Capt Ramli Ibrahim and Nancy Jipanis of Penampang in Sabah. As well as her boyfriend, Nadira also studied at the Langkawi pilot school and had known Fariq for nine years. There are reports that the missing co-pilot intended to marry Nadira soon but nothing has been confirmed. 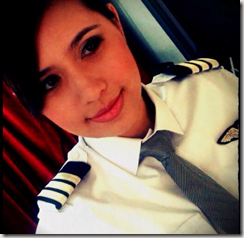 Nadira used to keep a blog where she talked about different topics. Her last post was on September 2012. She mostly describes the places she has been talking about nature and different journeys.

some of the places she talks about, describing with pictures and with lengthy detail include, Hotan, Karghalik and Kashgar.

According to her blog she started working for AirAsia in 2008, and on August of 2012 she was the winner of a contest she  called “lucky seven;” 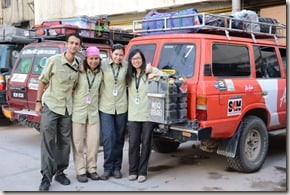 Which was also documented on her blog, she writes

I have been with AirAsia since 2008 and my job requires me to travel quite a bit. One of the countries I’ve often touched ground but never truly explored, is China. When AirAsia decided to sponsor one lucky employee on a trip of a lifetime to China by holding an internal competition at the end of May this year, it immediately grabbed my attention as this was no ordinary holiday. It was a chance to discover China’s leg of the silk road! I knew I had to take part even though winning chances might be slim. Little did I know that AirAsia would ultimately announce me to be the winner, which brings me to where I am right now, literally in the middle of nowhere in China.

The AirAsia young pilot has reportedly kept calm and has told her family to ignore the media.