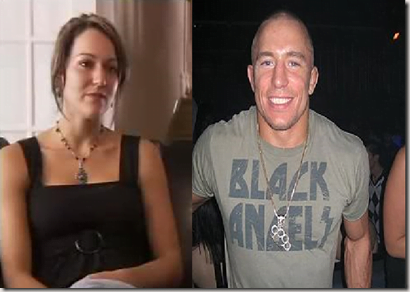 Wow, so Myriam St-Pierre who is the Champ’s younger sister is pretty hot, don’t you think! The lovely lady has come forward in recent media reports to set the record straight.

After TMZ reported earlier that the welterweight champ wanted to step away from the sport due to an unplanned pregnancy and the health of his father, St. Pierre’s sister Myriam, has came out to state the rumors about her father are false.

“My father is going very well! We get lots of calls and this rumor has to stop. It makes us pain. ”

“My father keeps my children. He did not keep it was about to die, ”

“I do not know where this rumor came from, but this is wrong,” she said.

Myriam who is Georges’ younger sister has catecorically denied the claim that their father is terminally ill. “My father is doing very well,” Myriam St-Pierre is quoted as saying, adding that the notion of her father being sick is completely false.

So that puts that rumor to bed, Myriam would not go so far as to say the unplanned pregnancy rumor was false though. Myriam’s brother isn’t going through the best of times, the champ a controversial decision win over Johny Hendricks, this past Saturday and raised expectations when he said he had to leave the sport for a while. That’s when things started to heat up and gossip site TMZ on an attempt to dig up the reason’s for her brother to step down for a while, spread the rumor that their father was almost with a foot inside the grave!

The site reported on Nov. 18th

Georges St-Pierre will take a break from the UFC to handle 2 major personal crises — his father is dying and he got a woman pregnant and doesn’t want her to have the baby … TMZ Sports has learned.

According to Myriam’s LinkedIn she works at Parc Régional de la Rivière du Nord, she is a recreational officer working in the travel and tourism industry. She attended University of Quebec at Montreal and studied Management of Tourism & Hospitality.

You can check more of her professional skills here.

It is not clear yet on what Myriam’s brother may be referring to as “personal issues” but we are more than happy to hear that their father, Ronald St-Pierre is doing just fine!