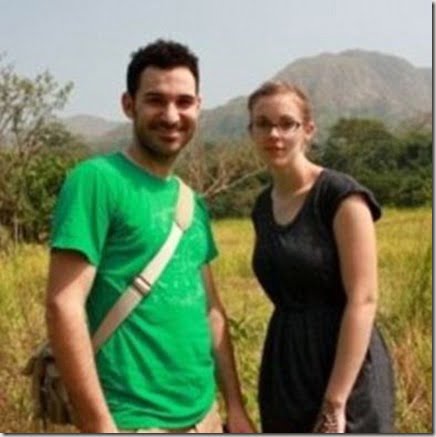 Meet 30-year-old Morgan Dixon, she is the girlfriend of doctor, Craig Spencer, who on Thursday became New York’s first diagnosed case of Ebola.

Morgan boyfriend had recently returned to the U.S. from treating Ebola patients in Guinea, he tested positive for the virus on Thursday. Spencer who –has a passion for improving health care in Africa and other countries –was rushed to Bellevue Hospital on Thursday and placed in isolation. On the plus side, New York City is quite prepared; Bellevue is one of four other hospitals in the city ready to handle potential Ebola patients. PinMorgan and Spencer are engaged and according to reports the couple is to be marry the next fall in Detroit.

Dr Spencer’s fiancee is currently in quarantine after he underwent testing for the deadly virus. The couple shares an apartment in Hamilton Heights in Upper Manhattan.

The moment her boyfriend detected that he had a fever on Thursday morning, he contacted MSF offices in New York and the predetermined plan to transport him to Bellevue went into motion.

Dr. Spencer has had close contacts with only three or four other people, including Morgan.

Dr. Spencer completed his work in Guinea on October 12 and left for the U.S via Europe on October 14. He arrived back in New York on October 17. According to her LinkedIn,  Morgan Dixon works as a development associate at The Hope Program in Brooklyn, a teaching program to help New Yorkers in poverty become self-sufficient.

I am dedicated to increasing opportunities for resource poor communities both in the United States and internationally in food security, global health, economic development, gender equity, and women’s empowerment. As an intern and teacher she spent time working in Costa Rica, China and Guatemala before returning to the US in 2011 to take up a role as a monitoring and evaluation intern.

She has a Masters of Public Administration from NYU Wagner and a BA in Sociology and Ecologically Sustainable Development from Beloit College. Her profile states she is ‘an ultimate frisbee player, a friend to coffee and enjoy exploring the world with family and friends’.

Online records show her relatives include Chrisele Gardner and Sarah Dixon. She has lived in Cincinnati, OH; Jackson Heights, NY and New York, NY. It is not know how long she and Dr. Spencer have been together but photos of the two of them on social media show them happily as they take trips together.