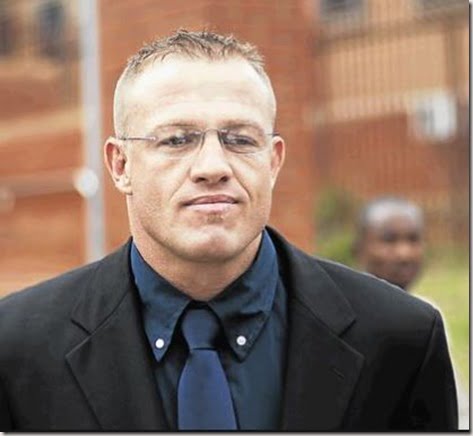 Self-confessed killer and former super middleweight boxer Mikey Schultz has found himself in the spotlight once again! The 39-year-old Self-Confessed hitman–for the killing of Brett Kebble –has been accused of stirring up drama in the North Gauteng High Court a.k.a Oscar Pistorius court.

Michael “Mikey” Schultz is a well-known figure in bouncer circles around Johannesburg. A former ****’s Angel who was linked to Elite Security, a company that provided bouncer and body guarding services in Johannesburg.

He appeared in a company brochure of Elite Security described as senior manager of the CNSG guarding division. 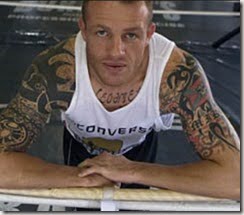 Mining magnate Brett Kebble was gunned down in Atholl-Oaklands Road, Melrose, Joburg on the bridge over the M1 on the night of September 27, 2005. Schultz along with two other accomplices: Nigel McGurk and Faizel Smith have maintained that Kebble, who was in deep financial trouble, wanted to die, and that they assisted him to commit suicide.

The former ****’s Angel member and Elite Security Services kingpin, Schultz was given indemnity from prosecution in exchange for testimony against the alleged criminal mastermind, Glenn Agliotti.

He has a long history of violent behavior and has been implicated in killings and assaults on several occasions. In 2012 he was reissued with licenses for five firearms. The now 39-year-old is licensed to use a Vektor rifle, a Colt pistol, a 9mm Astra, a 9mm Glock and a .40 cal S&W Taurus. Since then he has become much of a celebrity writing books and making movies. 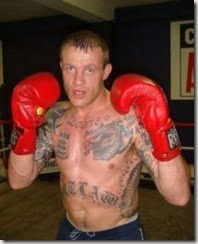 But his past and history of violent incident clearly does not help him right now. He was accused of making Oscar Pistorius’ sister cry. Media reports say Michael who appeared in court to support Reeva Steenkamp’s family was directed to sat down front row of the Pistorius family, he allegedly made a threat against Aimee Pistorius.

The married father of four said in his defense:

“I did not threaten anybody in court. I came in, I had a seat, I don’t know where the allegations come from – they can go back and look at the video footage,”

He caused a stir after he allegedly mouthed “F*** You” to Pistorius’s sister Aimee shortly after court adjourned for lunch. According to tweets from reporters inside the court room, Aimee was visibly upset and crying. Schultz then left the court complaining that the Pistorius family “thinks they own the front row.”

There is a split audience when it comes to Mikey, while some rather to remember the former boxer’s glory days –Schultz was just 12 when he made his debut in 1987. He fought as an amateur until 1995 before turning professional under the guidance of Boxing Hall of Fame’s Brian Mitchell. As a professional boxer Schultz had 14 fights and ‘reigned undefeated” until he retired in 1998. He had seven knockouts and registered two draws –Others, the haters see him as a “rise and fall” story.