The parents of the 8-year-old who was found dead inside a recycling  bin, Madyson Middleton.

As we previously reported, a 15-year-old boy who lived at the same home complex was arrested as a murder suspect short after Maddy’s body was found.

42-year-old Laura Jean Jordan reported her daughter missing on Sunday. Reports say she realized the girl was missing and called police at 6:08 p.m. Law enforcers and volunteers including her parents Michel Middleton and Laura Jordan immediately began searching, and 50 FBI agents joined the search later. Search crews never stopped looking for the girl until her body was found 26 hours after she disappeared.

Laura gave an interview to KRON4 where she said about her daughter: ‘She was just happy as could be, riding around.’
The distraught mother said after learning her daughter had been found, ‘I already fell apart. Now I’m in survival mode. I can’t explain how difficult this is.’
Jordan said her daughter was supposed to have a play date with another girl from the complex, while talking to the mother, she realized her daughter was missing. 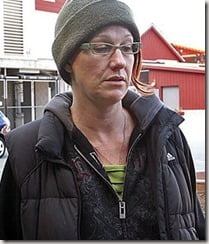 Maddy’s parents are separated but shared custody of their little girl. According to Santa Cruz Sentinel, Madyson’s father, Michel Daniel Middleton 41, is currently married to 44-year-old Dorian Middleton –who is 2013 sought and received a temporary restraining order against Laura Jordan because Jordan had allegedly “abandoned her daughter with my husband and I several times.”

According to court documents, Laura and Michel were never married. Laura and her daughter’s primary residence was the Tannery arts center.

Mr. Middleton was also involved in trouble with the law after he was arrested in Santa Cruz in January 2014 on suspicion of lewd acts with a child younger than 14, according to court records. No charges were filed in the case and it was dropped.