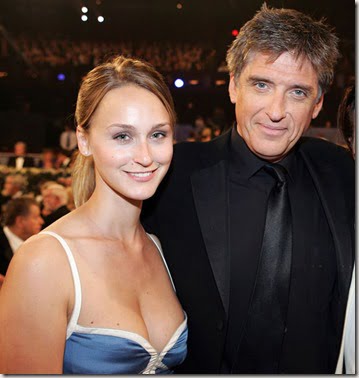 Her husband has thrown a bomb to all the Late Late Show fans announcing he will leave the CBS show at the end of 2014 after a ten-year-run! On an exclusive for Variety says he is relieved because he’s been wanting to let people know of his plan to move on for months!

“It wasn’t contentious. I was just like, ‘I feel like I’m done,’ ” “We were all fine and were tying up loose ends. And then Dave surprised everybody with the (April 3) announcement and that threw a spanner in the works. And I had to sit and keep my mouth shut while speculation raged wildly.”

A happy Ferguson also shared the happy news on the show, you can watch his announcement from the show here.

The couple have one son. Megan became a momma to a boy named Liam James, who was born 31 January 2011.

her famous and talented host show hubby has been previously married to two other women. Ferguson first tied the knot to Anne Hogarth from 1983 to 1986. Second time was to Sascha Corwin with whom he fathered a child, a son born in 2001.

Searching for more on beautiful Megan we came across a profile on a site called Fame Game. Not much is there but you will notice under “about” it says she is married to Ferguson, you can also se another snap of them there.

The marriage of almost 6-years seems very solid and although no one thought Ferguson would walk down the isle a third time it seems Megan has proven to be, the one. Not nearly as obnoxious as her husband she seems to enjoy the supportive wife role, so without a doubt she is with him on this one.

Although her funny-man is well aware that people is going to think he is leaving because of Letterman’s decision to retire next year, when he was asked about reports that his last contract included a clause that calls for him to see an eight-figure payout if he was not chosen as Letterman’s successor? He simply said

There’s two things we never discuss: Wages and ages.’ So I think I’m gonna stick to that.”

You can see another picture of the couple here. They are great looking people.