So, her 58-year-old hubby made a terrible mistake during last night’s Miss Universe 2015 held in Vegas. Harvey, ended up, pretty much ruining the most important moment of the big night, after he wrongly named Miss Colombia as the winner.

A few minutes went by and 21-year-old Ariadna Gutierrez was ecstatic after hearing the final result. Shortly after, Harvey joined center stage once again to said he had made a mistake. The real winner, was in fact, Miss Philippines, Pia Alonzo Wurzbach.

“I’d like to apologize wholeheartedly to Miss Colombia & Miss Philippines for my huge mistake. I feel terrible.”

According to the NY Daily News, Harvey might not have been entirely at fault. In a behind-the-scenes Snapchat post – which has since been deleted — Harvey insisted that the TelePrompTer fed him the wrong name. Should we believe him? Luckily for the Family Feud host, there is one person who stands with him, Marjorie Bridges-Woods. 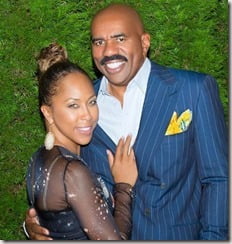 Her hubby used to be married to first wife, Marcia Harvey from 1980 till 1994. From his first marriage he fathered three children, twin daughters, Karli and Brandi 33, and a son Broderick Steve Jr. 24.

Steve was married to second wife, Mary Lee Harvey from 1996 to 2005. From his second nuptials he became a father of son, Wynton born in 1997.

According to Ballerwives, Steve first saw Marjorie Bridges-Woods at a comedy club appearance in Memphis, where he declared that she would be his wife. However, Steve and Marjorie went on to build separate relationships and families. That was over two decades ago. After both experiencing unsuccessful marriages, Marjorie and Steve decided to rekindle their relationship. The couple married on June 25, 2007, in Maui.

Ever since, Marjorie Bridges-Woods has been spotted sitting front row at many of the fashion industry’s most exclusive shows from New York to Paris! She has her own website called The Lady Loves Couture Fashion –where she chronicles her exciting fashion excursions as well as providing exclusive tips for living lavishly on any budget.

You can take a closer look at the lovely Mrs. Harvey on Istagram here.